A qiblah is a compass or similar device that is used by Muslims to determine the correct direction of Mecca. They are required to face the Kaaba in Mecca during their daily prayers, so discovering the right direction is very important to a devout Muslim. If you carry out a web search on “kiblah” or “kibla”, you will find a variety of modern products on sale to help believers find an accurate pointer to Mecca. Every mosque features a special niche in one wall known a mihrab which acts as a qiblah to orient worshippers towards the object of their devotions. 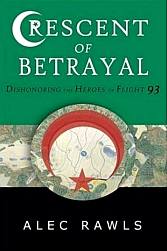 Alec Rawls is the author of Crescent of Betrayal, a book about the planned memorial to the heroes of Flight 93. The structure, the “Bowl of Embrace”, was originally called the “Crescent of Embrace”. It will be built by the National Park Service at the site where Flight 93 crashed outside of Shanksville, Pennsylvania on September 11th, 2001.

Mr. Rawls contends that the proposed memorial dishonors the heroes of Flight 93 and honors the Islamic terrorists by acting as a huge qiblah. He calculates that the axis of the crescent lines up almost exactly with the correct orientation towards Mecca from that area of rural Pennsylvania.

In the video below, Alec Rawls and the father of one of the heroes of Flight 93 make the case for the giant qiblah near Shanksville:

If you want more information, visit the Crescent of Betrayal website. Mr. Rawls has also started a petition calling for a Congessional investigation into the Islamic symbolism of the memorial’s design.

Not everybody agrees with him. For an opposing point of view, see this article in the Pittsburgh Post-Gazette. Some people towards the left end of the political spectrum consider him deranged and paranoid.
– – – – – – – – –
But an interesting corroboration to Alec Rawls’ assertion comes from an unexpected quarter: a Pakistani immigrant to the United States. The author of this article in All Things Pakistan describes the difficulties he faced when he came to the United States, and had to learn to face an entirely different direction during his daily prayers. He talks about some of the various devices and calculation methods that can be used to determine the direction of Mecca. 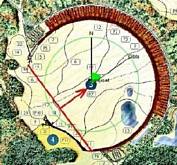 And as an illustration of what he’s describing, what do you think he uses?

Yes, that’s right: he uses the same site plan for the Flight 93 memorial, the original Crescent of Embrace.

He thinks it’s a reliable guide for finding Mecca.

So what do you think it is?

A bucolic and aesthetically pleasing memorial to those who died on 9/11?

Or the world’s largest qiblah?

7 thoughts on “The World’s Largest Qiblah”