The preferred tactics of the “anti-fascist” Left are classically fascist in nature. Rather than engage in spirited debate, they prefer to silence their opponents on the Right by using social pressure, verbal harassment, intimidation, and — if necessary — violence.

This tactic was much in evidence when Filip Dewinter, the prominent Flemish politician from the party Vlaams Belang, was scheduled to participate in a debate at the University of Ghent on October 7th. The storm troopers of Antifa were called out to intercept him, and they violently blocked his access to the auditorium.

The “anti-fascists” were successful in their efforts: the debate was cancelled. But the refreshing news is that Filip Dewinter and his supporters did not hesitate to fight back.

The dedicated efforts of our Flemish correspondent VH have produced the following report on the events in Ghent, based on the Dutch-language news sources and blogs. First, a translation of an article in Het Laatste Nieuws:

Filip Dewinter in a battle with activists in Ghent 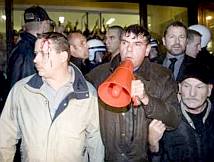 Near the auditorium “Blandijn” of Ghent University, a violent uproar occurred before the start of a debate organized by the NSV (Nationalist Students Association). At the entrance of the building a violent confrontation occurred when Filip Dewinter of Vlaams Belang with a score of supporters tried to gain access.

A group of activists from left-wing student associations had blocked access and kept opponents outside with violence. Both sides then pushed and pulled and there were some blows exchanged.

It was the first time that the rector had allowed the NSV to organize a debate on the premises of the university. The event was supposed to start at 8:00pm with a debate between Filip Dewinter and Jean-Marie Dedecker (LDD) about the cooperation between the Netherlands and Flanders. However, activists from left-wing student associations had blocked admission to the university building at 6:00pm.

Harassment by the extreme left

Dewinter had previously announced that he “would not let himself be intimidated by threats from the extreme-Left”. After consultation with the rector and the police he walked to the blocked entrance with his supporters. In the violent confrontation that resulted both sides exchanged blows and slaps and one supporter of the extreme right sustained a head-wound.

The police were present with fifty troops on the ground, and intervened. With the help of order troops and a water cannon the groups were driven apart.

Attack on freedom of expression

In response Dewinter said the incident was “an attack on freedom of speech”.

“We were struck and beaten because we wanted access to a university for an approved debate. The so-called anti-fascists used fascist methods to try to silence us. This can not be allowed in a democracy.”

When asked whether he also used violence, Dewinter replied: “If someone hits my face, I do not tend to turn my other cheek.” The debate was canceled. The police are still stationed at the location.

Before the event, Filip Dewinter wrote this on his blog :

I will not be scared away by threats and violence, and I will go tonight to the Blandijnberg [Ghent University] in Ghent.

Filip Dewinter, Geert Wilders, and Jean Marie Dedecker were invited to the debate. Previously, the rector of the RUG [Ghent University] had already announced that Wilders would not be welcome because his safety could not be guaranteed. Meanwhile it became known that extreme leftist organizations planned to prevent the debate by blocking access to the university building. The rectorate of Ghent University took note of this, but refused to make the necessary arrangements for a democratic and authorized debate that would take place in a safe way.

In August Filip Dewinter wrote an article on his site with some thoughts on civil disobedience. Perhaps the Ghent confrontation with the intolerant and fascist Left proves he is right:

Civil disobedience as a means to apply as means for action

On the sidelines of the annual IJzerwake [memorial for fallen Flemish soldiers in WWI] that took place Sunday in Steenstrate in Ypres, the Flemish parliament member Filip Dewinter told the VTM news that the Flemish Movement must radicalise and adapt its means of action to political reality.

Filip Dewinter: “If the Belgian authorities — government, parliament,… — do not want to listen to the democratic demands of the Flemish, we should not hesitate to switch to a higher gear. Elections lose meaning when the will of the people is ignored anyway… Therefore, the Flemish Movement should consider other methods such as non-violent civil disobedience actions. “

Filip Dewinter also said that “civil disobedience can mean that we stop paying taxes and fees to a government that refuses to take account of what a democratic majority of the population wants.”

“There has been enough scuffling and negotiating going on… It is time for action! The Flemish politicians have proven to be unable to respond to Flemish demands, nor to achieve anything. If necessary, the people should do what politicians do not want, and cannot do: realize Flemish independence through the power of numbers and put into practice the strength of their convictions.”

By mobilizing early and with a bit of luck, the Antifa group succeeded in bottling up some thirty extreme rightist dimwits in an auditorium. […] All doors where blocked by a large group of Antifas, and with the necessary vocal support the blockade of the debate was a fact. […] Thanks to Antifa Ghent, an example of defensive resistance! No Pasaran!

Blokbuster, the anti-Vlaams Belang smear blog with links to LGF, was also involved and writes:

With roughly 300 youngsters the University was blocked to the great annoyance of the extreme Right. Dewinter and Co. attacked the students physically, but the students, who had a larger group at their disposal, did not step aside and created a negative result for Dewinter and company.

Translation of an article in Dutch newspaper Trouw:

GHENT (Reuters) — Filip Dewinter, the leader of the parliamentary party Vlaams Belang, and his supporters got into a battle on Tuesday evening with left-wing activists of student associations in front of the University of Ghent.

“If someone hits my face turn I don’t feel the urge to turn my other cheek’’, Dewinter said after the brawl.

The Belgian politician wanted to attend a debate organized by the nationalist student association NSV. The leftist students blocked Dewinter’s access, after which there was pushing and pulling, and even some blows fell. The police had to intervene with a water cannon.

The debate was canceled. Jean-Marie Dedecker from the “List Dedecker” was supposed to talk with Dewinter about the opportunities for political rapprochement between Flanders and the Netherlands.

Earlier on the rector of the university, Paul Van Cauwenberge, decided that Geert Wilders was not welcome at the debate for security reasons. “We want to avoid incidents, and there is no ideological reason for the ban,” a spokesman of the university explained that decision.

7 thoughts on “Antifa Shock Troops Do Battle With Filip Dewinter”