Early in the morning on September 11th last year I live-blogged the anti-Islamization demonstration in Schuman Square in Brussels, and followed it up with reports and photos of the brutal arrest of Frank Vanhecke and other members of Vlaams Belang. The photo of Luk Van Nieuwenhuysen’s treatment at the hands of police spread virally across the internet and became an iconic image for the totalitarian repression visited upon the demonstrators by Belgian law enforcement.

Mr. Nieuwenhuysen’s escape from official custody in the police bus, not to mention the video of Filip Dewinter’s hand stuck in the bus doors, became woven into the dramatic narrative of the day’s events.

It’s no surprise that Freddy Thielemans, the Socialist mayor of Brussels, has banned a reprise of last year’s events. According to the Vlaams Belang website, as translated by our Flemish correspondent VH:

Tomorrow it will be exactly seven years ago that the terrorist attacks in New York and Washington took place. The board of the Vlaams Belang party decided earlier this year that our party, in cooperation with the organization Cities Against Islamization, will again organize a demonstration in memory of the victims. 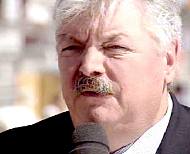 But, once again, this is without counting on the Brussels PS [Socialist] mayor: just as he did last year, Freddy Thielemans has prohibited the demonstration.

According to Thielemans, the ban is necessary due to “the extremely sensitive theme of the event, the proximity of the Immigration Service, the nearby sensitive [i.e. Muslim immigrant] districts and the period of Ramadan”. The fact that in the capital almost weekly demonstrations are held by illegal immigrants and fundamentalist Islamists is apparently no problem to the Brussels government.

There is hardly any better proof of the growing Islamization and accompanying curtailment of our Western rights and freedoms.