A press release from Vlaams Belang, as translated by VH:

Demonstration 9/11: Civil Court and Council of State reject the demand to abolish the ban 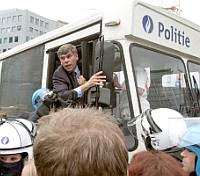 Filip Dewinter: “Cowardly attitude of the courts acts as a crippling of free expression”

The appeal by Filip Dewinter in the civil court and the Council of State regarding the abolition of the ban by Brussels Mayor Freddy Thielemans of the demonstration in memory of the 9/11 victims was rejected this afternoon by both courts on the basis of procedural arguments.

The civil court ruled that the petition was filed too late, the Council of State considered that the application for the demonstration was submitted too late. The courts did not deliver a substantial verdict on the ban.

Vlaams Belang and Cities against Islamization (STI) regret that both courts did not dare to rule on the merits, but hid themselves behind formal and procedural arguments. The cowardly attitude of the Brussels court and the Council of State is all the more painful because it is this very unwillingness and the undemocratic attitude of Freddy Thielemans that cripples freedom of expression.

Vlaams Belang and Cities against Islamization will in any case hold a symbolic demonstration in memory of the victims, tomorrow at 11 o’clock, September 11. At no time it has been the intention to provoke or seek confrontation with the police. The action will be dignified and serene.

The press will be briefed tomorrow morning about the precise location and exact course of the symbolic demonstration.