I just received the following report by a member of Vlaams Belang on the recent conference in Florence.

Filip Dewinter was invited by the “Associazione Una Via Per Oriana” for the commemoration in Florence of the Italian author Oriana Fallaci. Following this event, Filip Dewinter was honoured with the prize “Oriana Fallaci” by the president of Una Via Per Oriana, Armando Manocchia. In his speech, Manocchia stressed that the prize was awarded to Filip Dewinter “because of the courage he has, rowing upstream against the flood wave of political correctness. With ‘Cities Against Islamisation’ Filip Dewinter has funded a democratic movement of resistance that will protect our European identity and Western civilisation against the Islamic religion of conquest”. 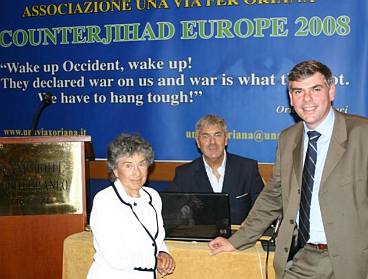 
The conference in Florence bore the theme “Islamophobia and Freedom of Speech”. Oriana Fallaci was a well-known progressive Italian journalist who wrote two books after the terrorist attack of 9/11 with sharp criticism against Multiculturalism and Islam. These books, The Force of Reason and The Rage and the Pride were translated into many different languages, and millions of copies have been sold worldwide. Many of leading authors who are critical of Islam were present at the commemoration, including Bat Ye’or, David Littman, and others.
– – – – – – – – –
Filip Dewinter addressed the audience as the president of “Cities Against Islamisation”. He said: “Oriana Fallaci was driven by a mission; her mission consisted in prosecuting the cowardice of Western and European politicians, and in breaching the European policy of consensus. After the 9/11 attacks Oriana Fallaci tried with her sharp writings to open the eyes of the European intellectual, political, and social elite that had been collectively hummed asleep by the leftist multiculturalism.”

Filip Dewinter quoted Oriana Fallaci on Islam: “Islam is like a pool, and a pool is a puddle of water standing still. Water that does not flow away, does not move, and thereby is never purified. The West is like a river nourishing life. It’s like water that flows on, that’s purified and renewed in it’s course, that absorbs other water and finally reaches the vast sea. Thanks to the force of reason we’ll eventually prevail. But hence we must continuously renew, continuously absorb other water and prevent any dam against the flow of the water current.”

The full text of the speech by Filip Dewinter, including the photo gallery of the event, can be viewed on filipdewinter.be, or here.