Last night’s news feed featured an article about the “Anti-Porn Bill” in Indonesia, sponsored by the newly-ascendant Islamic fundamentalists in the Muslim regions of the archipelago.

Our Flemish correspondent VH has been following events in Indonesia closely, and sends us the following roundup of what’s happening there: 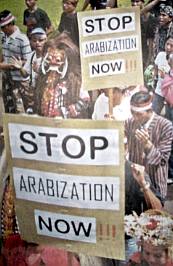 That front page caught my interest this morning, so I took a photo of it. This is an excellent word: “Arabization”. It covers all. That is what happens in Java for instance; it’s the fluffy beards, the long dresses, the jilbab-wearing babies; it’s the creeping Sharia, Islamization, and destruction of ancient cultures, all crawling around in one word that says everything. Arabization.

Below is quick overview of the imminent falling-apart of Indonesia…

In Atjeh, the first district in Indonesia to fall for the (worldwide) rise of Sharia, Islamic law has been well established by the Taliban-style local government. Religious police, whippings, canings and, if things go well, cutting off hands and all the rest of that savage Islamic repertoire.

The Arabization plague has already reached Tangerang, on the outskirts of Jakarta. A curfew for all females, a ban on lipstick, and the compulsory wearing of the jilbab are only a few indications of submission to the colonizing Arabization.

Last year this came to light for a short interval after a woman was thrown in jail for waiting shortly after sunset for a public bus to bring her home from her work in a factory. An older lady who was waiting for the same bus ended up in the same jail.

Inspired by the smoothly-running Arabization, lawmakers came up with a Mandatory Halal Food Law. “Halal certification should be obligatory rather than voluntary. I agree that all food and drugs producers must obtain halal certificates and put them on their products because this is what Islamic sharia obliges for Muslims,” House religious affairs commission chairman Hazrul Azwar told The Jakarta Post.

He did not think producers would dare to resist: “because they would want to avoid the stigma of having uncertified products fall into the haram (not halal) category… It would have (negative) consequences (for them).”

Tourists are “worms, snakes, maggots — those are things that crawl,” said the frontman of the Indonesian “Taliban,” Abu Bakar Ba’asyir.

In a sermon (video) last year he urged his followers to beat up Western infidel tourists when they spotted them.

In the speech he called for signs warning tourists they were entering a Muslim area (all over Indonesia), and urging infidels to cover themselves appropriately (=jilbab). He exhorted his supporters to reject the laws of Parliament, and said that following laws that contradict Islamic Sharia law was “blasphemy”.

“Don’t be scared if you are called a Muslim hardliner,” Bashir said. “It must be like that. We can’t follow human law that is in conflict with Allah’s law.”

“God Willing [Praise Allah] that there is none [Westerner] here! If there were unbelievers here, they should be beaten up. Don’t tolerate them! Those infidel tourists are worms, snakes, maggots… those things that crawl around! They run around naked [in Bali]! They offend morality!”…

“The youth movement here must aspire to martyrdom. The young must be first at the front line — don’t hide at the back. You must be at the front, die as martyrs, and all your sins will be forgiven. This is how to achieve forgiveness.”

On top of this, he warned of retribution should the Bali bombers be executed by firing squad.

With this bill, some say, Indonesia shows that democracy can be used to destroy democracy itself. It shows diehard Multiculturalists exactly where appeasing Islam ends: the Arabization of a people. Muslim activists defend the bill as “necessary to counter a growing Westernization of Indonesian society.”

The real aim is clear: Bali is one of the world’s most popular tourist destinations, for a large part because of its unique and tolerant exotic culture. Foreign investors are avoiding Java, and settle and invest en masse in Bali. East Javanese have two options to find work: abroad in the Arab world as servants or in Bali as workers in the building industry. East Java, the district that produced the Bali bombers and retarded thugs like Ba’asyir, gives them no opportunity at all.

Islamists want to put an end to this. Two bombings didn’t make the island go bankrupt; therefore the third attack is through the law, just as happens in the EU, the UN, the Netherlands, Malaysia, and — as an interesting sidelight — Lebanon, which is close to asking Interpol to arrest Geert Wilders and the Danish cartoonists.

It will all be backed up by a law, thanks to democracy.

Bali, Papua, and all those other districts that did not kneel for the Arabization should warn Jakarta for the last time: You choose between the bill and the abolishing of Indonesia, or us.

DENPASAR, Indonesia (AFP) — Thousands of Balinese in traditional outfits rallied on the Indonesian holiday island Wednesday against an anti-pornography bill derided by critics as a threat to local cultures.

More than 5,000 protesters occupied the lawn of the local parliament on the mostly Hindu island to oppose the bill, which is under deliberation by mostly Muslim lawmakers in the capital Jakarta.

The bill, which could be passed in a matter of weeks, criminalises all public acts and material capable of raising sexual desires or violating “community morality”.

Protesters denounced the proposed law as too broad and a threat to local customs on the island, where naked temple statues proliferate and skimpily dressed foreign tourists unwind on famous beaches.

Demonstrators turned up to the rally in traditional clothes including semi-translucent temple blouses, saying such clothes could be deemed too suggestive if the law was passed.

“Balinese and other ethnic groups have a different view on what sexual or pornographic materials are,” local intellectual Wayan Sayoga said.

“We can view nudity without being trapped by lust because we look at it from an aesthetical perspective,” he said.

Protesters put on traditional dances and one activist read out a poem that repeated the word “genital” to prove the mention of sex would not send the crowd into fits of lust.

“The government should never forget that Indonesia is a country based on non-discrimination over race, religion and ethnicity,” activist Luh Anggraeni said.

The bill, which is being pushed by Muslim parties in Jakarta, is being challenged on other islands in the archipelago nation which encompasses cultures ranging from conservative Islam to semi-naked animist tribesmen.

Although it is the world’s largest Muslim-majority country, Indonesia has significant and officially recognised minorities of Christians, Hindus, Buddhists and Confucians.

2 thoughts on “Stop the Arabization of Indonesia”