Below is a news story that ties in closely with all the recent arguments in right-wing circles about whether someone who attends events in company with the National Front or the BNP or the FPÖ is a racist, a Nazi-enabler, a neo-fascist, etc., etc.

There will always be those among us who prefer purity of doctrine to anything else. In addition, we’re all understandably afraid of having PC anathema pronounced on us. The dread of being labeled a “racist” induces a primal urge to put leagues between ourselves and any group that is even slightly questionable.

Unfortunately, from time to time events in the real world have a nasty habit of intervening. As we fastidiously pick our way over the multicultural mud, raising the hem of our skirts high so as to avoid the tiniest stain, evil and brutal people who pay no mind to such civilizational niceties are at busy at their work.

That’s why Hell’s Angels are experiencing a sudden surge of growth in Denmark. According to Politiken: 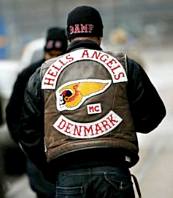 The Hell’s Angels biker group is experiencing a flood of new applications for membership, in particular for its support group AK81. The group normally receives only few enquiries in its web-based guest book, but the past week alone has seen 250 queries.

Seventy-five of those enquiring have asked to become members of the AK81 group, or to be invited to Hell’s Angels parties in order to gain affiliation.

AK81 is a support group for the Hell’s Angels. The acronym stands for the Danish words Altid Klar (Always Ready), while 81 are the alphabet numbers for H and A.

The increase in membership enquiries comes in connection with a showdown in recent weeks between immigrant groups and the Hell’s Angels as well as shows of strength by Hell’s Angels members who have walked the streets of Copenhagen and Århus en masse.

The Hell’s Angels home page has introduced a special AK81 page providing direct mail to the group, thus preventing police from being able to track approaches.

A concerned police force has, however, registered the flood of interest in being recruited to what is termed the Hell’s Angels ‘mini-army’.

“We are worried that this is escalating and involving more and more people,” says Deputy Chief Superintendent Jørgen Isalin of the National Investigation Support Centre.

“It’s all going very fast now and there is no doubt that more and more people are joining. This is also happening on the other side too where large numbers of anti-social youths are supporting criminal immigrant groups who cause trouble in the streets and are provoking the Hell’s Angels,” he says.

Last month the conflict between the two groups cost the life of a young man. Since then the showdown has become more open, with shots being fired, hand grenades lobbed and marches in which the gangs show their strength.

“First of all it was the other groups that bothered the Hell’s Angels. Then they started AK81, and now they feel strong enough to arrive at parties, pubs and techno parties to show off their insignia. That is something the other groups won’t accept,” says Isalin.

Perhaps this is the beginning of the real resistance.

When government fails to protect its citizens from violent gangs, it creates a vacuum, and it’s only natural that violent gangs should move in to fill the void. They’re not the kind of people with whom one would sit down to tea and crumpets, but they’ll get the job done.

The good burghers of Whoville sleep peacefully in their beds at night because rough men stand ready to do violence on their behalf. But what if the only rough men that are available are the kind we don’t want to associate with? What if the only people willing to defend our race are… well, racists?

I personally know people in Britain who are going to hold their noses and vote for the BNP. They’re not in the slightest bit racist or anti-Semitic, but the BNP is the only party which is willing to stand up for the country and support a traditional British identity.

That’s why I believe in opening lines of communication to people in all parties that seriously oppose the Great Jihad. Rather than wait until these parties expel all the anti-Semites and become perfect, why not look for those members who already have the opinions we want, but who support the party because they think it’s their only hope?

The anti-Semitism will fall away naturally anyway for a party that wants to become a viable national force. Serious anti-Semites will defect to the other side, because the Muslims are their natural allies, and the rest of us aren’t.

We don’t have the luxury of waiting until all parties become perfect. There isn’t enough time. Make no mistake about it: the big crisis is on its way, and it will reach parts of Europe in ten years or less.

When the time comes, what if the only people who are willing to stand up and oppose Islam are the “racists”? What will the fascistophobes recommend then? That we lie down and die rather than have any truck with race-nationalists? That we submit to the jihad rather than violate the pristine righteousness of our moral state?

In 2020, or 2015, or 2012, as the twilight of Sharia rolls across the land, those who would remain pure in their non-racist principles will still be wringing their hands and wincing in distaste, right up until the last moment, when the cry of “Allahu Akhbar!” resounds as the knife descends upon their necks.

So anyone who intends to survive that moment may want to lie down with the dogs now, even if it means getting up with fleas later. There will be plenty of time afterwards for flea powder — assuming that the Great Jihad can be defeated.

Would you rather be right, or effective?

51 thoughts on “Fighting Fire with Fire”