I’ve written a number of times in this space about Ehsan Jami. He’s a Dutch apostate from Islam, and at one time formed a Committee for Ex-Muslims (which has since been disbanded). He has been physically attacked and injured, and lives under constant threat of death for his apostasy.

Late last year he announced that he was making a cartoon movie about the life of Mohammed. Last March he and some of the sketches for the movie were shown on Dutch television, and that was too much for the Dutch government, which brought pressure to bear on the egregious blasphemer. One report said that if Mr. Jami didn’t cancel his movie, the government would withdraw his security detail and leave him at the mercy of all the fatwas against him. That was enough to bring him to heel, and the cartoon about Mohammed never saw the light of day.

Ehsan Jami has not given up, however. He’s got another movie in the works, this time not a cartoon. He’s not saying much about it, but once again Mohammed will be involved.

Here’s the report from HP/De Tijd, as translated by our Flemish correspondent VH:

It all seems quiet for months around Ehsan Jami. But that’s only appearance, since the 23-year-old founder of the now long-defunct Committee for Ex-Muslims is working on, yes, a movie. “Something that is very sensitive and confrontational,” Jami writes in an e-mail to HP/De Tijd.

“The film is in the final phase. I expect that it’ll be ready this month.” But about the timing of the release he does not want to say anything. “Otherwise you get a kind of hype or fear.”

An earlier film project of Jami was ultimately cancelled. The ex-Muslim had worked on a cartoon about the Prophet Mohammed and had as he said already some “four and a half minutes” ready.

Jami ceased production, however, after a call by Justice Minister Ernst Hirsch Ballin, shortly after the release of that other movie, Fitna by Geert Wilders. The minister was alarmed after the showing of a still of Jami’s film in the TV program Netwerk [after which the Christian Democrat EU politician Hans van den Broek — who instigated the EU boycott of Austria when the FPÖ was elected — responded furiously and demanded that Jami first ask permission of Justice Minister Hirsh Ballin, also a Christian Democrat. A demand that is actually in violation with the Freedom of Speech act — VH]. 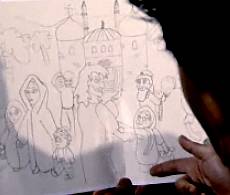 In that drawing the prophet Mohammed was depicted, on his way to the mosque hand in hand with his child bride Aisha. Some details: Mohammed had an erection and on top of the dome of the mosque stood a swastika. “Please do not participate in that false depiction, which drives a wedge in our society,” Hirsch Ballin said after the Netwerk broadcast.

Jami’s patron from the very beginning, the Law Professor Afshin Ellian, confirms that the ex-Muslim is working on a new film. “Two weeks ago he called me and said that he is very busy with it.” Ellian does not know what the movie will be about. “But it is in any case not a cartoon.”

Jami himself does not want to disclose many details. “Especially now with the existing political oppression,” he emails. It is clear though who the main character will be. Surprise: “There will be a prominent role for Mohammed.”