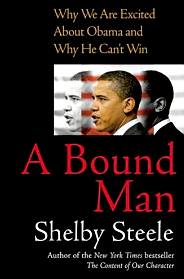 I’m about halfway through Shelby Steele’s new book, A Bound Man: Why We Are Excited About Obama and Why He Can’t Win. Mr. Steele, like Barack Obama, was born of a white mother and a black father. He has an intuitive understanding of the pressures experienced by a mixed-race American to embrace fully his blackness, with all the social and political stances that such an identity implies.

He has ended up in a different place from Mr. Obama — he has rejected the path of racial grievance and does not blame white society for all the problems experienced by blacks.

Here’s an excerpt from the book, taken from pages 50 and 51:

I used to laugh when my own mother — married to my father until death them did part — would say, “You know, interracial marriage is not for everyone.” She was never impressed to meet another interracial couple, never patted them on the back for being courageous. People had to truly know themselves, she believed. They had to accept both the freedom to live as they chose and the price they would pay for doing so. What seems clear is that Barack Obama is a man who truly wants to be black, a man who is determined to resolve the ambiguity he was born into.

Does this disqualify Obama for the presidency? It may. There is a price to be paid even for fellow-traveling with a racial identity as politicized and demanding as today’s black identity This identity wants to take over a greater proportion of the self than other racial identities do. It wants to have its collective truth — its defining ideas of grievance and protest — become personal truth. And then it wants to make loyalty to this truth a reflex within the self, within one’s own thoughts, so that all competing thoughts are conceived in disloyalty. A perfectly internalized censorship. To be “authentically black” is to think more as a black than as one’s self.

So Barack Obama has worked hard to keep from being a “traitor to his race”, and may have surrendered his authentic self to do so. In contrast, Shelby Steele, according to the standards of the race-grievance hustlers, is most assuredly treasonous to his blackness.

But more than one race is involved here.

Who is a traitor to which race?

6 thoughts on “A Traitor to Whose Race?”