A couple of weeks ago we reported the deployment of the Danish warship Absalon to the Horn of Africa. It’s part of an international task force charged with protecting merchant ships from the depredations of Somali pirates.

According to yesterday’s Jyllands-Posten, the Absalon has been involved in repelling three pirate attacks in less than a week (my translation): 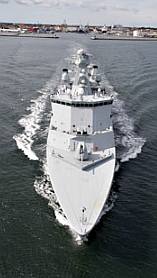 On Saturday the Danish warship Absalon contributed to the prevention of two pirate additional attacks in the Gulf of Aden off the Horn of Africa.

First Absalon was asked for support in connection with a hijacking of a merchant ship 160 nautical miles away. Before Absalon’s armed helicopter arrived, a skiff (fast motor boat) approached so closely to the merchant ship that the crew tried to prevent the pirates’ access to the ship by using fire hoses. The helicopter’s arrival, however, made the pirates flee.

Even as the Danish helicopter went into action, Absalon received another emergency call from a merchant ship only 20 nautical miles away. The ship was pursued by four skiffs manned by suspected pirates.

Absalon immediately ordered the merchant ship to steer towards the Danish warship at full speed; Absalon changed its own course to come as soon as possible to the rescue. Then the suspected pirates gave up and vanished.

Only last Wednesday Absalon was able to avert a pirate attack in the Gulf of Aden.