The Wall Street Journal has an opinion piece today by Elizabeth Ames Jones, a member of the Railroad Commission of Texas.

For those of us who weren’t aware of it, Commissioner Jones describes how things are run in Texas:

Just so you know who’s in charge of things.

Commissioner Jones recounts how Texas was able to take advantage of the new technology that allows extraction from shale deposits:

In the 1980s, Houston wildcatter George Mitchell drilled the first well into the Barnett Shale formation that stretches through north and central Texas. He tapped into what would turn out to be one of the largest onshore natural gas reserves in the United States.

It would take nearly two decades and millions of dollars to develop the horizontal, hydraulic technology necessary to bring that gas to the surface. But today there are about 7,500 gas wells in the Barnett Shale — many located in the city limits of Fort Worth, and some a stone’s throw from suburban homes and schools.

What I’ve seen is that while Congress balks at drilling in the Arctic National Wildlife Refuge in Alaska out of fear of disturbing a few caribou, we’ve moved ahead to safely tap into an energy reserve located underneath suburban homes. And there is no better example of how Texas gets the balance right between energy and the environment than the development of the Barnett Shale. 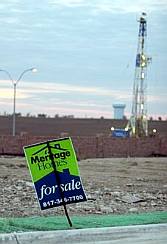 Geologists have known that this reserve contains a mother lode of energy for at least 30 years. Yet even today it’s not clear where the boundaries are. Wildcat wells and some dry holes continue to define the perimeter of the Barnett. What we do know is that the formation stretches from the Dallas/Fort Worth area up into rural counties in north Texas, spanning some 5,000 square miles. We also know that there is an estimated 27 trillion cubic feet of natural gas locked up in it. Americans use about 23 trillion cubic feet of natural gas a year; four trillion cubic feet a year are imported. So being able to tap into the Barnett is a big step toward producing all of the country’s natural gas needs domestically.

For nearly a century, Texas’s regulatory and tax structure has worked the way it is supposed to. It didn’t lock up oil and gas fields that seemed to be unprofitable. Instead, because of state policies that have allowed local governments, schools and property owners to benefit through property taxes and royalties, energy companies have been able to lease mineral rights and prepare to tap into the fields once they became profitable.

Here’s the money quote, the one that lets you know we’re only dealing with a politician after all:

state policies that have allowed local governments, schools and property owners to benefit through property taxes and royalties, energy companies have been able to lease mineral rights…

Now that looks like a win-win situation, doesn’t it? Homeowners get royalties and energy companies get to drill in the backyard. Everybody’s happy, right?
– – – – – – – – –
Let’s have a look at what the lucky homeowners say [article is dated 2006]:

In neighborhoods all over Fort Worth and in rural and suburban Tarrant County, the story is being repeated. People watch their quality of life being eroded by the same Barnett Shale gas boom that is filling city coffers and putting money in the pockets of developers, gas well drillers, the mayor, and plenty of regular citizens. And the worst part, perhaps, is that they feel powerless to do anything about it, especially when calls and pleas to city hall and the EPA and the Texas Railroad Commission produce no visible results. [my emphasis — D. Remember that the Commission is where Jones earns her bread and butter]

Fort Worth’s drilling ordinance and what many see as a lack of enforcement of even its limited protections are not the only problems. Many homeowners feel betrayed by real estate developers and salespeople who they believe knew about planned gas wells and didn’t tell them, or who now tell them their homes have lost value. They see the value of their biggest investment, in some cases the place they had planned on living the rest of their lives, threatened, as well as their own safety and peace of mind.

And beyond that, they have been stunned to discover the jaw-dropping realities of Texas law, in which mineral rights trump the rights of surface property owners. Until a drilling crew arrives on their property or a royalty contract arrives in the mail, many don’t know whether they even own their minerals, much less what their rights are if someone else owns them. The “split estate,” as it is called, means that homeowners may have no recourse — and little hope of recouping much of their loss — if the owner of the mineral rights decides to sink a well on their land.

The situation is deeply confusing for the real estate industry, even for the majority of agents who act ethically in dealing with mineral rights and property near gas wells. (Is there any residential property left in Tarrant County that isn’t near a well or potential well?) Like their clients, many have never before had to deal with property where the surface rights are held by one person and the mineral rights by another.

So much for the rosy picture painted by Commissioner Jones.

The reality is uglier than just surface rights vs. mineral rights, though:

Finding out about the limited rights that surface property owners have compared to mineral rights owners is perhaps the biggest shock for many people. In Texas, “the law is clear,” Fambrough said. “The mineral estate is dominant over the surface [owners] when it comes to mineral exploration and production. That precedent was set probably over 100 years ago.”

That’s why Hyde and Green [two property owners cited in the story — D] have made repeated trips to Fort Worth City Council and to the Texas Railroad Commission in Austin: They want to educate citizens and officials about the realities of gas drilling. They’re appalled by the ignorance of even state officials about what really goes on around wells during and after drilling. For instance, Green said, Railroad Commission officials said they didn’t know and couldn’t find out what was in the sludge left over from drilling operations because it was “proprietary information” to the drillers. So how could the people testing their water — which in their neighborhood is now so brown and nasty-smelling that most people have started drinking bottled water — know what chemicals to test for?

Based solely on the blatant omissions of Ms Jones, The Wall Street Journal has a story here, and a moral obligation to look into the details. The editors published this opinion piece and now it’s time for due diligence on their follow-up story.

There is going to be some follow-up, right?

You can ask here, which is the link to their forum for this particular article. I put in a comment, but these are moderated, so who knows if it will go up?

Here’s what the page says:

Welcome to the Opinion Journal forum.

Please comment on this week’s Cross Country column, “How Texas Struck It Rich Beneath Suburbia,” by Elizabeth Ames Jones.

And remember to include your FULL NAME in order to be considered for posting.

Opinion Journal editors will be making a selection of entries to post online.

Here is how this post evolved past what I’d originally intended:

I found the WSJ article on Larwyn’s email tips. Being an enthusiast for shale oil production, I opened the op ed piece and read with satisfaction what was happening in Fort Worth. It appeared to be a good blend of technology, capital investment, and protection of private property rights.

Not wanting to replicate the picture that the Wall Street Journal used, I began a Google image search for similar suburban oil or gas wells on private property in the Fort Worth area. I found them all right, but I got more than I bargained for.

Using “Barnett shale Fort Worth suburbs” as my search label, I came across the perfect picture (see image above the fold). It accompanied a story of the underbelly of the paradisiacally friendly beast that Commissioner Jones described.

Yes, I was disappointed. I like the WSJ and it bothered me to see this propaganda published with no balanced story from those who are left to deal with the fallout of short-sighted decisions by cities and municipalities. What is most disturbing is the insistence by local government that the property values of these homeowners has not decreased — thus they are forced to pay unfairly assessed property taxes for homes that have dropped in value since the wells have been installed without their knowledge or say-so.

This is cynicism at its worst. Fort Worth and Tarrant County ought to be ashamed.

After finding The Fort Worth Weekly account from 2006, I looked around for more recent stories. They are out there, in abundance, and they don’t make the politicians look any nicer.

Googling “gas shale wells Fort Worth” (sans the quotes) turned up a mother lode of information. I decided to go with Fort Worth’s Star-Telgram, since they started a blog on the Barnett Shale phenomenon in October, 2007. The site is full of news and up-to-date. For example, they reported that the Railroad Commission is finally opening an office in Fort Worth, leasing their space from the City Council.

Given that the Star-Telegram has its own section on this problem, there is no way on God’s green earth that Commissioner Jones was unaware of the issues involved:

The City Council leased some office space today to the Texas Railroad Commission, so that the commission can open a district office in Fort Worth.

The commission has been under fire from the State Auditors office and others over lax enforcement of environmental rules. The office in Fort Worth is supposed to help the commission get closer to the Barnett Shale gas play.

Here are our previous stories about the Railroad Commission:

Here’s an editorial about the plan for the satellite office:

The Star Telegram section — “Barnett Shale” — has this as its subtitle: Drilling deep for answers about the natural gas boom in North Texas Check out the journalists who are running herd on this story. They’ve had the real story on Commissioner Jones and her cronies for nine months now. In a short post entitled (Texas style), “Dancin’ with the ones that brung ’em?”, the paper’s Barnett Shale section has this information on the shenanigans of Ms. Jones & Co:

A couple of readers were surprised to see that the Texas Railroad Commissioners, the three elected officials who oversee the oil and gas industry, got a lot of campaign contributions from the industry.

The website followthemoney.org spits shows that commissioners Michael Williams , Chairman Victor Carrillo and Elizabeth_Ames Jones got the bulk of their campaign money from the oil and gas industry.

The commission was criticized by the state auditor for its low level of inspections and for allowing inspectors to accept gifts from the companies they oversee. Williams wrote in an opinion piece that the aupdit was positive overall.

So we come full circle. First, Williams wrote his propaganda piece for the Fort Worth paper about what was in reality a condemnatory audit of the Railroad Commission. Now, one of his Commissioners has a fairy tale published in the Wall Street Journal.

The US is in dire need of domestic oil and gas. Running roughshod over the constitutional rights of property owners is not the way to do it.

Bad karma, Commissioner Jones. Y’all are definitely storing up more than your share. You should know by now: given the tenacity of Texans, you’re going to reap more sorrow than all those bribes and oil shares will be able to paper over.

19 thoughts on “To the Wall Street Journal: Please Follow the Money”