From The Religion of Peace site: 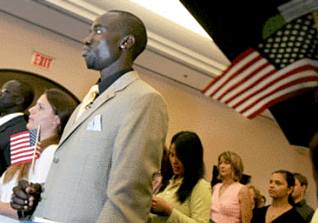 He was one of the lost boys.

Now the Sudanese-American young man, an escapee from the Muslim captors that took him at gunpoint from his parents, is running for his life again.

After spending ten years in a refugee camp Lomong came to live with a New York couple (along with five other boys). He attended high school there and then college in Arizona.

Joseph Lopez Lomong was chosen by his teammates to be the flag bearer in the opening ceremonies at the Beijing Olympics…
– – – – – – – – –
If that weren’t enough, he will run onto the field, flag in hand, just a year after achieving American citizenship.

And if that weren’t enough, his teammates include two more naturalized citizens, Kenyan- American Bernard Lagat and Mexican-American Leo Manzano.

There are many happy endings in this story, with many ironic tragedies nested inside those tales. For the latter, consider that China supplies arms to the Sudanese who stole this boy from his parents.

The runner himself has some parting words:

“In America, everyone has a chance to do all these things,” Lomong said. “You follow the rules, people will choose, and if I’m blessed to get that opportunity, I’ll get it.”

6 thoughts on “The Lost Boy’s Run for Freedom”