On August 1st, the Libyan Claims Restoration Act, sponsored in the Senate by Democrat Frank Lautenberg (N.J), was passed unanimously and sent on to President Bush:

As Congress rushed to begin its August recess, the two chambers, within hours of each other, approved legislation creating a new U.S.-administered fund to compensate victims, while giving Libya immunity from additional terrorism related lawsuits.

Bush signed the bill lickety split, and now the final papers have been approved in Tripoli. 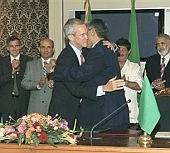 The agreement includes final payments from Libya to the families of the 270 people who died in the Lockerbie bombing. In addition, there will be compensations to Libyans whose family members died in the U.S. bombings of Tripoli and Benghazi in 1986 — the same year as the Lockerbie terrorism. Included in those who died was the adopted daughter of Muammar Kaddafi.

In addition, the Libyan Claims Restoration Act includes compensation for those who died in the Berlin disco bombing, another bit of terrorism organized by Libya’s not-so-secret services.

The monies paid to Americans will come from the Libyan government.

The compensation for Libya’s dead will not be paid by American taxpayers. Instead, a separate fund will be set up for this purpose which will allow for the deposit of monies to be distributed to Libya’s victims. The government is vague on exactly which entities are depositing into this account, but one can safely guess it just might be businesses who want to operate in oil-rich Libya. For darn sure, there won’t be any international medical groups rushing to put money in the pot. Not to mention that Bulgaria already paid more than its share by foregoing repayment of Libya’s debt in the attempt to get its nurses back.

Meanwhile, in a kissy-huggy exchange between the two countries –

Bush expressed satisfaction also with the “efforts” made by Gaddafi to pursue “stability in the world, in Africa in particular, to restore peace in Darfur and to bring Sudan and Chad relations back to normal”. In the message Bush underlined “Libya’s great role on the international stage” and hoped “cooperation between the two state to continue”.

Bush’s “expressed satisfaction” must be the end process of breathing for much too long the fetid air that wafts over from Foggy Bottom. Peace in Darfur?? Sudan and Chad have normal relations? Life on Mars??

Never mind. For those of us who are punch-drunk by now from the long, murderous slippery slide to this moment, here’s a map to the places where the West slides before ending stuck in the Slough of Despond, covered with mud.

Let’s go over the admitted exchanges between Libya and the USA. Bear in mind that this started under Reagan, whose policy here doesn’t look much different than say, Kennedy’s:
– – – – – – – – –
1. May 6 1981: Intelligence reports said there was strong evidence that Libyan leader Muammar el-Qaddafi had plans to assassinate American diplomats in Rome and Paris. Acting on this intel, President Reagan expelled all Libyan diplomats from the U.S. He closed Libya’s diplomatic mission in Washington, D.C.

2. August 1981: Reagan ordered U.S. Navy jets to shoot down Libyan fighters if they ventured inside what was known as the “line of death.”

This was the line created by Qaddafi to demarcate Libya’s territorial waters, which he said extended more than 100 miles off the country’s shoreline; the U.S. and other maritime nations recognized Libyan territorial waters as extending only 12 miles from shore.) As expected, the Libyan Air Force counter-attacked and Navy jets shot down two SU-22 warplanes about 60 miles off the Libyan coast.

3. Dec. 17, 1985: Libya was fingered by the US as being responsible for the Rome and Vienna airport bombings. These events killed twenty people, five of whom were Americans.

January, 1986: The US ordered the Navy to patrol the Gulf of Sidra — in the ocean territory arbitrarily claimed by Libya. Again, Reagan reiterated the international standard of a twelve mile limit on territorial waters. Qaddafi was warned that any Libyan forces further out than twelve miles were subject to attack.

4. April 5, 1986: The La Belle discotheque in Berlin was bombed, killing one American soldier. In addition, one Turkish woman was killed and nearly two hundred other customers were wounded.

After U.S. intelligence intercepted Libyan government communications implicating Libya in the La Belle disco attack, President Reagan ordered retaliatory air strikes on Tripoli and Benghazi… Operation El Dorado Canyon, involved 200 aircraft and over 60 tons of bombs. One of the residences of Libyan leader Muammar el-Kaddafi was hit in the attack, which, according to Libyan estimates, killed 37 people (including Qaddafi’s adopted daughter) and injured 93 others. As a result of this American operation, U.S. national security officials said Libyan-sponsored terrorism ceased “for a long time.”

April 17, 1986: However, as this source noted, it was only two days later that the bodies of three American University of Beirut employees were discovered. The Arab Revolutionary Cells, a pro-Libyan group of Palestinians affiliated with terrorist Abu Nidal, claimed to have executed the three men in retaliation for Operation El Dorado Canyon.

December 21, 1986: So we see where this kind of hit and run skirmishing on both sides culminated: the massive overkill of the Lockerbie bombing in Scotland, with its decades-long messy aftermath.

Now, with the passage and signing of the Libyan Claims Restoration Act, our relations with Libya are being “normalized” after their abrupt cessation twenty-seven years ago. And, of course, there will now be peace and harmony among all…except for hundreds of mourning families, but hey, a few eggs for a tasty omelets.

Yesterday, there was a Big Deal meeting between the US and Libya:

The signing of the comprehensive claims settlement agreement climaxes a major push by the two governments in recent months to resolve the compensation issue, and Assistant Secretary of State for Near Eastern Affairs, David Welch, said in Tripoli it will “turn a new page” in the bilateral relationship.

The U.S.-Libyan rapprochement began in 2003, when the Tripoli government renounced weapons of mass destruction and terrorism and agreed to pay compensation for terror attacks attributed to Libya — most notably the 1988 bombing of a U.S. Pan Am jumbo jet over Lockerbie, Scotland…

I will say that Libya’s 2003 declaration appeared to be a version of being “scared straight” by America’s actions in Iraq and Afghanistan. However, who would ever believe the Libyan “Crazy-as-a Fox” Madcap about anything, even the time of day?

As for his imprisonment and torture of the Bulgarian nurses in 1998, only to release them in 2007 after being promised nuclear goodies by Sarkozy, the less said the better. Except to note that this vaunted US-Libyan rapprochement began four years after the cruel imprisonment of the Bulgarian nurses, back when it appeared they were going to be executed. Just another few eggs…negligible collateral losses, right?

At least the doctor who was jailed and tortured with them is bringing suit against the illegitimate sons of Satan who run Libya. Run it into the ground.

The latest chapter in the Libyans vs. the clueless West is the news that our Secretary of State is enthusiastically planning her visit to Khadafy.

More than these sordid details, I cannot bear to tell you. Kindly ignore our President’s megaphone messages to Russia regarding Georgia.

2 thoughts on “The Libyan Scores Another One”