Last Saturday a group of demonstrators, under the leadership of SIOE, converged on Aarhus in Jutland to protest the racist behavior of local Muslim immigrants. The issue that sparked the protest was a series of violent attacks by Muslims against Greenlanders, who are native Danes, in a housing project in Gjellerup.

SIOE England issued a press release yesterday with a report on demonstration:

Press release for the Anti-ethnic cleansing of Greenlander Danes in Aarhus.

The demonstration was relatively peaceful despite attempts to disrupt it by Autonomer groups.

We were surprised that self-styled anti-racists turned up to try to spoil an anti-racist demonstration.

Pictures and text at the SIOE blog.

And here are some excerpts from the SIOE blog post, with photos:

“Racism is the lowest form of stupidity! Islamophobia is the height of common sense!”

The Autonomers in the counter demonstration could not grasp the simple truth that islam is not a race. They were left speechless when Anders Gravers pointed this out.

Stephen Gash delivering his speech about islamisation and muslim persecution. Behind him the signs read:

“In with SIAD out with Jihad” (left) and “Stop racism” (right) 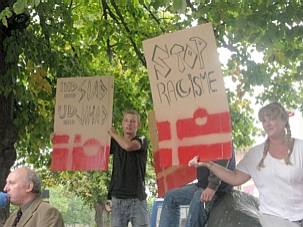 SIOE conducted a peaceful demo in Aarhus to support the poor Greenlander Danes who have been ousted from their hometown of Gellerupparken.

This is ethnic cleansing of the worst kind taking place in a sophisticated European country with a mature democracy.

We doubt that this was due to any sense of shame Gelleruppen muslims felt. They most likely stayed in Gellerup to stone a few Greenlander Danes.

Anyway, the small number of Autonomers who turned up had no answer to this suggestion…

The sign reads “Open borders” which was a pretty stupid thing to say at a demo protesting against the ousting of Greenlander Danes from their homes by muslim immigrants. 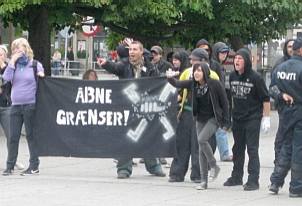 They also had no answer when asked why they were not supporting the persecuted Greenlander Danes instead of shouting in an imbecelic manner at SIOE the only group openly protesting about the treatment of Greenlanders at the hands of bullying muslims.

The only real anti-fascists present in Rådhusplads, Aarhus today were SIOE supporters. Other self-styled anti-fascists were the real fascists who only pretend to be against oppresssion and persecution.

The Autonomers in Denmark have lost all credibility. To regain it they should read the Koran and find out what a fascist manifesto looks like.

A speech by Stephen Gash of SIOE England was made describing what islamisation is and how the EU is moving towards a totalitarian Eurabian superstate.

See the SIOE blog for more text and photos.

14 thoughts on “Stop the Ethnic Cleansing of Greenlanders!”