The largest opposition party in Norway is the Progress Party (FRP). It has lately been growing in popularity, and routinely takes positions that run contrary to politically correct opinion.

The latest FRP announcement is at odds with the consensus EU position. According to yesterday’s VG Nett, as translated by our Norwegian correspondent The Observer:

Jensen wants to move the Norwegian embassy in Israel, from Tel Aviv to Jerusalem 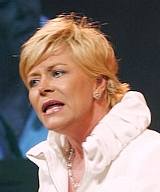 The Norwegian embassy in Tel Aviv could be moved to Jerusalem if Siv Jensen becomes Norway’s next prime minister after the general election in 2009.

The FRP chairman (Progress Party) made the promise during a speech to the organization Med Israel For Fred/MIFF (United With Israel For Peace) last Tuesday.

There will be dramatic changes in Norway’s Middle East policies if the FRP chairman becomes the next prime minister, according to DagenMagazinet (Norwegian newspaper), which was present at the meeting

“I intend to move the Norwegian embassy from Tel Aviv to Jerusalem as quickly as possible. Why should the rest of the world cave in to the enormous Arab pressure, and not have their embassies in the capital of the country? This is not happening anywhere else. We need to stand tall and give our support to Israel,” said Siv Jensen to the hundred or so people attending the meeting.

She also heavily criticized the official Norwegian Middle East policies, which she described as unrealistic and hostile to Israel.

Has no faith in the road map

“I don’t believe that the Israeli-Palestinian conflict can be resolved by using the Road Map for Peace. Any truce negotiated with Fatah will be sabotaged by organizations loyal to Hamas. Hamas is part of an international terror network trained and financed by Iran. Hamas and other organizations like them are constantly provoking Israel to keep the conflict alive,” Jensen said.

The MIFF (United With Israel For Peace) supporters were satisfied with Jensen’s refusal to accept a division of Jerusalem, but not all of them were happy to hear that the FRP chairman supports the creation of a Palestinian State.

“I think we have to accept the creation of a Palestinian State. It is important for the Palestinian people to have somewhere to live. Both the Arabic countries and the Western world will have to join forces and work together to achieve this, but Israel will also have to contribute to peace in the region,” Jensen said.

2 thoughts on “FRP: Move the Norwegian Embassy to Jerusalem”