Diana West has just returned from a whirlwind trip to Europe. It wasn’t the usual high-speed Eiffel Tower/London Bridge/Coliseum jaunt: she went to Europe to tour the most crucial front in the Counterjihad. Western Europe is the place where toxic Multiculturalism, the emerging totalitarian superstate of the EU, and Islamic fundamentalism have combined to form a dangerously explosive mixture.

Steen was kind enough to supply us with photos of the Ms. West’s meeting with Dansk Folkeparti in the Danish parliament under the auspices of Trykkefrihedsselskabet (the Free Press Society). 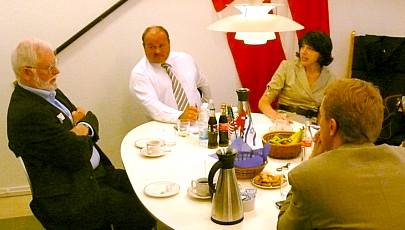 With Ms. West in the photo above are (left to right) Lars Hedegaard (the chairman of Trykkefrihedsselskabet), Søren Søndergaard (press secretary of Dansk Folkeparti) facing the camera, and Morten Messerschmidt (a Dansk Folkeparti member of the Danish parliament) with his back to the camera.

She gave an overview of her trip in a post earlier this week :

One thing I realized on my recent Euro travels is that President Bush set out to democratize the wrong part of the world. It is European-Union Europe (gripped by welfare state socialists, identity-denying appeasers and leftist totalitarian bureaucrats), NOT the Islamic Middle East, that could have actually benefited from an infusion of good, ol’ fashioned democratic principles — you know, freedom of speech, respect for election results (see EU attempts to reverse Ireland’s recent No vote on the Lisbon Treaty), things like that.

Her Townhall column has more observations:

As a dutiful American columnist, I should probably be pondering the half-baked presumption behind Barack Obama’s bizarre “presidential” seal. Or shaking my head at John McCain’s hair-trigger panic over an aide’s answer to a question about terrorism’s political impact. Or clucking over the irresponsibly childish $300 billion goodie bag — I mean, mortgage bailout bill — that just passed in the U.S. Senate. But I can’t stop thinking about Europe.

No surprise there. I just returned from a swift-moving, fact-finding journey through six European countries. 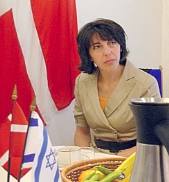 All these decades later [since WW2], such basic experiential differences still play out in ways both obvious and subtle in the American and European disconnect on sundry issues and attitudes — the fissures Americans airily dismiss as anti-Americanism, or perhaps see as doctrinal differences (eroding but historical) over socialism and capitalism. Such differences have helped turn Europe into the European Union, a nation-destroying behemoth both driven and empowered by the infantilizing machinery of the welfare state. Indeed, so shockingly totalitarian is the orientation of the EU, it strikes me that President Bush’s misguided effort to democratize the Islamic Middle East might well have been better aimed at liberating the hostage peoples of the Brussels-dominated supra-state.

That said, it’s crucial to recognize the precious common ground between the United States and Europe. While on a different plane from those fallow battlefields of the Ardennes, it is also sacred soil. I refer to our shared cultural and historical progressions as civilizations whose ideals are founded on liberty. Such liberty is once again under threat and from an ideological enemy — the ideology of Islam, which, as spread by a massive influx of Islamic immigration over the past several decades, promises, as historians and writers from Bat Ye’or to Mark Steyn have copiously explained, to transform all of Europe into an Islamic continent.

And what do our presidential candidates think of the strategic ramifications of an Islamic Europe? Who knows? The likely but not inevitable civilizational shift is so far off the U.S. radar screen (with our government keeping it there, what with its recommended lexicon discouraging all terror-related references to Islam) it is invisible. American tourists — those flush enough to pay their way with Euros, that is (and I didn’t see many) — can still visit the old Europe of gingerbread towns and Gothic cathedrals without noticing much more than a few hijabbed women, signs of Islamization that usually fail to register more than a multicultural nod.

Of course, even many (most?) residents are blind to the staggering changes in progress. This is something I discovered, to take one example, in conversation with a conservative British MEP (Member of European Parliament), who, after nine years of representing a sector of southern England in Brussels, both doubts the existence of “no-go zones” in Britain — despite the writings on the subject by the Bishop of Rochester — and has never visited the Brussels neighborhood of Molenbeek. A stone’s throw from the ritzy EU environs in which we sat, this Islamic enclave more closely resembles a bustling outpost of the umma than the so-called capital of Europe.

“You ought to get out more,” I suggested.

Her meeting with the British MEP is covered more fully in a blog post:

This week’s column mentions a conversation I had with a conservative British MEP (Member of European Parliament) who took issue with my concern about the Islamization of Europe for two basic reasons:

(One) For roughly the first 12 or 13 centuries of Islam until 1979, as he explained it, everything was effectively hunky dory with Islam; then that wascally wadical Ayatollah Khomeini showed up, ruining everything. In other words, Islam, which includes Islamic law (my concern), is fine; it’s just those wascally wadicals who are a problem. And (two): My MEP told me he knows a perfectly lovely man who is Muslim — prays five times a day and everything — so, well then. At one point in the conversation, he rather abruptly said that if my reading of Islam’s intrinsic incompatibility with Western-style liberty was correct, Europe had only two choices: Conversion to Islam or deportation of Muslims. Rather than face up to the hard-eyed task of shoring up the bulwarks against Islamic law, for instance, it was, for him, presumably, far better — far easier — to believe my reading of jihad and dhimmitude was just plain wrong.

Perfectly in keeping with these beliefs, he expressed doubt about the existence of de facto Islamic-ruled “no-go zones” in his own Britain — despite the writings on the subject by the Bishop of Rochester. He also told me, when asked, that he had never, in all of his years in Brussels, visited the neighborhood of Molenbeek, an Islamic enclave a very short drive from the EU environs in which we sat.

Well, I went to Molenbeek earlier this month and brought back this slide show of snaps. What you will see may call to mind something more like Little Marrakesh or Istanbultown than the so-called capital of Europe. To some, it will be possible to see in Molenbeek a fairly bustling display of non-indigenous culture certainly not unfamiliar to Americans who have both lived through and been a part of historic immigration waves…

What is different here, of course — and I say “of course” given the voluminous reporting that has already been done on the subject by historians and writers from Bat Ye’or to Bruce Bawer, from Robert Spencer to Mark Steyn to Oriana Fallaci and on — is that what is going here is not a traditional process of assimilation to the host (European) culture, but a quietly revolutionary procedure best described as reverse colonization: Europe is being colonized by Islam. As Bernard Lewis has written, given current patterns of immigration and non-assimilation, Europe will be an Islamic continent before the end of this century, whether my British MEP notices or not.

I will be continuing to write and post about my travels, which include conversations with some very brave politicians in Europe who are actually working both to stop and to reverse this Islamization process.

Refer to the original articles for links to other sources.

The “brave politicians” referred to above are the ones Dymphna and I often write about here, the same ones who are routinely vilified in the USA, even by conservatives, as “right-wing extremists” and “white supremacists”.

With any kind of luck, Diana West’s position as a syndicated columnist in the United States will help spread — however marginally — a different story about Europe to Obama-obsessed American political junkies.

The outcome of our election this fall is crucial in the struggle against the jihad. But so were the recent Italian election and the referendum in Ireland. The upcoming parliamentary elections in Britain are also of equal importance to the long-term success of the West.

It’s a good idea to keep the spotlight on Europe.

Photos ©2008 Snaphanen. Thanks to both Henrik and Diana West for identifying Søren Søndergaard in the photo.

5 thoughts on “Touring the Front”