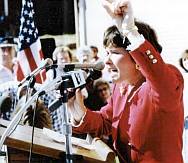 For quite a while I’ve been meaning to write about the Hon. Sue Myrick, who represents North Carolina in the United States Congress. Ms. Myrick is one of the few members of Congress who are working tirelessly to expose the efforts of radical Islam to infiltrate and subvert the government of the United States.

We received an email last night in support of Rep. Myrick’s efforts from Charles Kastriot at the Society for the Defeat of Islam:

On behalf of the Society for the Defeat of Islam, I am requesting that you contact your members of Congress to request their support for Rep. Sue Myrick’s (R-NC) “Wake Up America” agenda. The agenda can be viewed at the following address:

The agenda includes the following:

For those unfamiliar with Abdurahman Alamoudi, details of his criminal activities can be read at the Department of Justice’s website.

That’s Abdurahman Alamoudi in the photograph at right, standing with George W. Bush during the 2000 presidential campaign.

If you’re wondering why the Democrats haven’t made any political hay out of the Alamoudi-Bush connection, it might be because Mr. Alamoudi has been dedicated in his bipartisanship. Here’s a brief note about his close encounter with Hillary Clinton’s Senate campaign during the same period:

In 2000, the Clinton campaign was forced to return a $1,000 contribution from Abdurahman Alamoudi, who is now serving a 23 year prison sentence for reportedly laundering money from Libya to fund terrorist activities.

Alamoudi, founder of the radical American Muslim Council, held numerous meetings with the Clintons, and once boasted, “We are the ones who went to the [Clinton] White House and defended what is called Hamas.” Incidentally, on its campaign finance disclosure forms, the Clinton campaign listed Alamoudi’s affiliation as the American “Museum” Council. Just a typo?

According to The New York Daily News, as First Lady, Clinton “held several White House Muslim holiday receptions to which individuals opposed to the Mideast peace process and Israel’s existence were invited.”

Remember: Alamoudi is simply one of the few who have been exposed and caught. For every slimeball like him there are dozens more still at liberty, working the halls of Congress and the statehouses in a tireless effort to undermine the American political process.

If your senator or congressman is less than diligent in resisting Islamization, drop him or her a card, send an email, or make a phone call pointing out the work of Sue Myrick and urging support for her.

Bringing about political change is a slow, difficult, and tedious process. It isn’t going to happen on its own; it requires the intervention of ordinary citizens with their political representatives.

Make your congressman feel the heat. Only when enough constituent pressure is brought to bear will change occur.

10 thoughts on “Sue Myrick Wants to Wake Up America”