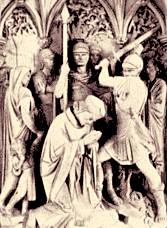 The persecution of Christians for their beliefs is no novelty. It’s been going on for almost two thousand years. In Muslim countries, especially, one expects that life will be difficult for those who have professed Christ as their savior.

But reading these stories from Algeria made me wonder how the EuroMed initiative is going to be squared with the laws and customs that are considered the norm in North Africa. How are we to “harmonize” the laws of Libya with the laws of the EU?

Here’s the first story, from ANSAmed:

Algiers, May 27 — The court in Tiaret, in Algeria’s southwest, has asked for a more in-depth investigation in the trial of an Algerian woman who converted to Christianity four years ago. “The judge could have closed the case of Habiba K. today, given the fact that the crime is not valid,” lawyer Khalfoun told ANSA. The woman is accused of having “practiced an unauthorized non-Muslim worship” and the prosecutor has asked for a three-year prison sentence.

Tiaret (Algeria), May 27 — A trial against six Algerian Christian Protestants accused of proselytism and of having practiced religion in a non-authorised place was opened at the tribunal in Tiaret, 300 km west of Algiers. All six people were arrested after having gone out of a building where they had met to pray. Prosecutor Aissaoui asked for two years of imprisonment for the accused. The trial will be resumed in a week. In Tiaret, a town with some 20,000 inhabitants, the Christian community comprises between 70 and 100 people, according to the accused.

The woman from the first story may face three years in prison for her chosen religion. The six people in the second story may face two years for publicly praying to someone other than Allah.

When the time comes for the Euro-Mediterranean merger, how will these practices be reconciled with European norms? How can the culture of Algeria be aligned with that of Europe?

Well, the ground is being prepped for the change already, at least in England. Consider this article from This is Wiltshire:

A teenage motorist was told to remove an England flag from his car by a police officer because it could be offensive to immigrants. 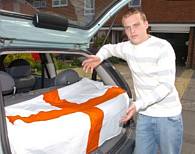 Ben Smith, 18, was driving back home to Ingram Road in Melksham on Thursday evening after filling up with petrol, when the officer stopped him on a routine patrol.

He checked the tax disc and tyres on his Vauxhall Corsa but when he noticed the flag of St George on the parcel shelf he told Mr Smith to take it down.

Mr Smith, who works for G Plan Upholsterers on Hampton Park West, said: “He saw the flag and said it was racist towards immigrants and if I refused to take it down I would get a £30 fine.

“I laughed because I thought he was joking, but then I realised he was serious so I had to take it down straight away. I thought it was silly — it’s my country and I want to show my support for my country.”

PC Dave Cooper, of Chippenham Road Policing Unit, said he had never come across an officer asking someone to remove an England flag from their car because it could be racist.

He added: “It all depends on the context of a stop. If they are going past a lot of Polish people, for instance, and abusing them, then we possibly would ask them to take the flag down.”

How likely are Poles in the UK to get upset by the English flag? Really: how likely?

Or is it more probable that certain people of the South Asian persuasion are going to take offense? Adherents, that is, of a religion that we dare not name?

As you can see from the photo, the English flag consists of the emblem of Saint George — a red cross on a white background. Is it a coincidence that the cross is considered offensive and “racist”?

Make no mistake: the subjects of Great Britain are being prepared for their integration into Eurabia.

When the time comes, they’ll be ready.

Hat tips: For the Algerian stories, insubria; for the English flag story, AMDG.