“This is just barmy.”

That’s the voice of traditional British common sense. This story is definitely barmy, but we live in barmy times.

Muslims are normally the only ones who get insulted and then call on British law enforcement to help silence their critics. But this time it’s a different fringe cult that has managed to suppress the free speech of ordinary people.

A teenage boy is facing a possible criminal prosecution for holding a sign describing the Church of Scientology as a “cult”, police said on Tuesday.

The boy, who is described only as a minor, was taking part in a demonstration outside the church’s central London headquarters on May 10 when City of London Police officers ordered him to remove the placard.

It read: “Scientology is not a religion, it is a dangerous cult.”

When he refused, he was issued with a form of summons for an alleged breach of public order. Police plan to pass a file to the Crown Prosecution Service to decide whether charges can be brought.

Since the lad’s sign was simply stating his opinion, one would think that his protest would be covered by the right to free speech under English Common Law.

But anyone who thinks that is foolishly naïve. By statute, speech may be suppressed if it is “insulting”:

A spokesman for the force said the youth had been “reported” under section five of the Public Order Act, which contains measures against displaying signs considered to be “threatening, abusive or insulting”.

Consider the young boy in the photo at right. I’m insulted by his sign, and I’m sure many “persons of English background” in the UK were insulted, too.

So the police arrested him and he was remanded, right? Sentenced to six weeks of diversity training and multicultural sensitivity courses, yes? 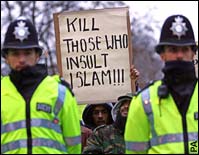 Then how about this photo?

Surely somebody besides the Prophet was insulted by that sign. Were the police insulted? And then they arrested the hateful miscreant holding the sign, right?

We know that Christians can be insulted without causing the arrest of anyone. But now there are two religions, Scientology and Islam, that are officially and statutorily protected from feeling insulted. Will there be others?

And this case has implications that extend beyond religion. Doesn’t it mean that Manchester United supporters can have Leeds United supporters arrested for their slogans and songs? In my day it was, “Dennis Law and Bobby Charlton, too — the biggest set of poofs in football boots!” Not just insults, but homophobia!

The names have changed since then, but surely the sentiments are the same. Are the Lancastrians insulted yet? It’s time to put all those Leeds supporters behind bars!

But back to the article:

Writing anonymously on an internet forum, the boy said: “Within five minutes of arriving … I was told by a member of the police that I was not allowed to use ‘that word’.”

He said he was given 15 minutes to remove the sign, which was eventually confiscated by officers.

Chief Supt Rob Bastable said: “City of London Police upholds the right to demonstrate lawfully, but we have to balance that with the right of all sections of community not to be alarmed, harassed or distressed as a result of other people’s behaviour.”

That last statement describes a Sisyphean task. If the state is to guarantee that none of its citizens will be distressed, then total control of all public behavior will be required. CCTV is just the bare beginning — voice-activated tape recorders will have to be installed in every lamppost, bus shelter, and pub. Sensitivity-enforcement officers will be stationed in all public locations.

Finally, however, the voice of sanity:

The case was described as “barmy” and an attack on free speech by Shami Chakrabarti, the director of Liberty, the human rights group.

She said: “They will be banning words like ‘war’ and ‘tax’ from placards and demonstrations next. This is just barmy.”

It’s going to get barmier yet. Just wait and see.

11 thoughts on “Insulting the Scientologists”