In the photo that accompanies the news story you can see a screen cap of a Fitna video being watched by an Indonesian. There’s no way to tell if it’s a version subtitled in Indonesian — the frame in the screenshot has no text — but based on the traffic that has arrived here from Indonesia over the last week, the Indonesian translation of the movie, as well as the existence of a version of Fitna subtitled in Indonesian, were widely known in the archipelago.

So I’d like to think that we played our little part in this sordid drama.

Try this google search. The last time I attempted it, Gates of Vienna was second on the list, the first non-Indonesian site in the search results. Not only that, this search puts us in the top two positions. Thus it’s no surprise that Indonesians wind up here when they attempt to watch what their government wants to hide from them.

So for all our Indonesian readers: the YouTube version is unavailable, but until your government bans the ZippyShare, Rapid Share, and Pirate Bay versions, you can still download and watch Fitna.

I’ve posted a new version of the Fitna download table below the jump. But first, here’s the news story from AFP: 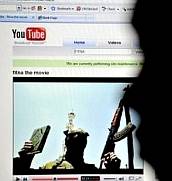 Indonesia’s main Internet providers said they had acted on a government request to block websites showing the film.

The move came after the communications minister last week wrote to the file-sharing site, YouTube, asking it to remove the 17-minute film, “Fitnah,” made by far-right Dutch lawmaker Geert Wilders.

“We apologise, we have for the time being blocked sites and blogs which carry ‘Fitna,’ at the request of the minister for communication and IT,” Internet provider Speedy said on its website.

Speedy said it had stopped users accessing eight different sites, including blogs that carried the film.

Another provider, Radnet, told users it was “temporarily closing access” to YouTube and MySpace, a popular social networking site, at the minister’s request.

The minister wrote to Internet providers last week asking them to block access to sites that carried the film on the grounds that it could “disturb religious and civil harmony at a global level.”

Muslim groups here have held several protests outside the Dutch embassy in the capital Jakarta.

Most have passed off peacefully, but last Wednesday dozens of members of a Muslim student group attacked a Dutch consulate building on Sumatra island, burning a flag and breaking down the gates.

President Susilo Bambang Yudhoyono has banned screenings of the film and barred Wilders from entering Indonesia, the world’s most populous Muslim nation with some 90 percent of its 230 million people following Islam.

Update: I revised the table below to remove three dead links (thanks to an alert reader) . Evidently Rapid Share is being targeted, because the three links were all from that site, and returned the same message:

This file has been deleted.
Reason: THIS FILE IS FORBIDDEN TO BE SHARED! Complaints received.

5 thoughts on “Indonesia Pulls the Plug”