Last week I reported on the parade scheduled for this past Saturday in downtown Binghamton, NY, by the Muslims of America. The occasion for the celebration was the first annual observance of Mohammed’s birthday in Binghamton.

Our Binghamton correspondent MM was there, and emailed us to say that the event went off as scheduled, despite the inclement weather. She sent us the following report, along with some photos:

The event was referred to as being first “annual” and a “parade and festival”. It was pretty much just the participants from Islamberg with almost no non-Islamic spectators. I counted maybe six average joes watching from the sidewalk, plus a couple of local police on each of three blocks directing traffic, and two local media people. One was from the local Press and Sun-Bulletin newspaper and the other from the local Fox TV station. After the parade, during the speeches, I noticed almost no non-Islamic onlookers.

I arrived fairly early and stood for while the people were still lining up for the parade. While I waited, there was a Christian fellow who came over near me and started shouting about Jesus. He was right near the police and not close enough to the parade-walkers to cause a scene. 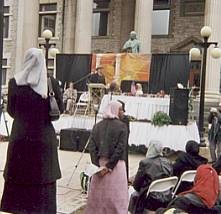 The parade folks walked for several blocks and then over a bridge and a couple more blocks, and then they turned around and walked back to where they started. They sang a song while walking and there were many women and children marchers. There were several banners being held up for different organizations. Among them were some kind of Islamic scouting group, one banner that had Islamberg written on it somewhere, and one for the “Hand to Hands” group. Also: the first one was for the International Quranic Open University.

After the parade-goers were down the road a bit, another Christian guy showed up with a big sign. Neither of those two Christian guys caused any kind of big disturbance. There weren’t any political protesters. I expected the Indymedia/progressive types to show up in solidarity since Binghamton has a big progressive presence, but. I sure didn’t notice anyone like that. I also didn’t see Tarik Abdelazim [the deputy mayor] anywhere.

After the parade they all went and sat down in front of the courthouse. They had a big stage set up for the speakers and a bunch of chairs in front on the right for the women and children, and some chairs on the left under a tent for the main men.

Before I mention the speakers, I should also add that the “festival” was basically just the speakers plus a couple small tents which I assume featured items for sale underneath.

Now onto the speakers: they started things off by singing the national anthem accompanied by some drumming. Then someone recited from the Koran, and a second person did the same. Then Matt Ryan the Binghamton Mayor spoke about unity between Islam and Christianity for a couple of minutes. The next speaker was Rev. Douglas Taylor of the Unitarian Universalist church in Binghamton, and he spoke for a while about unity as well.

The final speech was by Diane O’Heron, a professor at Broome Community College. It was so cold out that I was shivering, and I left.

While watching the speakers, I had a good view of what was happening on the outskirts towards the back of the stage and I noticed a couple guys talking into walkie-talkie-like devices, so I guess those were the security people that you mentioned. Those were the only ones that looked anything like security people, and the police presence was tiny, just used to direct traffic.

There is a story about the parade in the Press & Sun-Bulletin, and some more photos are here. WICZ Fox 40 has a video clip of the event.

The “security people” MM refers to are the private security companies run by Jamaat ul-Fuqra and the MOA out of their various compounds around the country. Some observers believe that the security companies are a stratagem used by JuF to acquire large quantities of weaponry and ammunition in a semi-legal manner.

The International Quranic Open University, as I have reported previously, is essentially a book and tape marketing operation for Sheikh Syed Mubarik Ali Shah Gilani, the founder and head of the Muslims of America and Jamaat ul-Fuqra. The sheikh hosts some — ahem — unorthodox academic disciplines at his University.

For example, here’s a blurb for Quranic Psychiatry:

Book 1, Ultimate Fraud of Freudists contains results of a research and demonstration project done at the Psychiatric Research Institute, Saudi Arabia — and U.S.A Research Centers since 1977. In front of researchers from eight countries, El Sheikh Syed Mubarik Ali Shah Jilani, Vice Chancellor of International Quranic Open University, demonstrated the affects of chapters and lines from Holy Quran in healing some “incurable” mental and physical diseases. Since a large number of patients have been healed by the qualified practitioner of Quranic Psychiatry (QOU), this book gives theoretical and practical explanations of causes and remedies of many “incurable” diseases.

Also there’s The Science of Interpreting Events Seen During Sleep and Awakened States and the Method of Directing and Averting the Ill Affects:

The International Quranic Open University Inc. is pleased to produce this most valuable and informative documentary which concerns every person. No one can afford to remain ignorant of the least basic knowledge of understanding and knowing the interpretation of events seen during sleep and awakened state. Allah taught this to Hazrat Yoosuf (as) and the purpose was not only to teach him, but to also give him knowledge of averting and directing the harmful affects of things seen. We see that Pharaoh, the then ruler of Egypt, saw in his sleep state 7 lean cows devouring 7 fat cows. Similarly, there is a lot in Surah Yoosuf for us to learn. Hazrat Yoosuf interpreted not only what it meant, but also adapted various methods to combat the ill affects of the 7 years of famine by which this beholding meant.

The IQOU is just one of a number of income streams that help the sheikh live in style in his mansion in Lahore. The residents of Islamberg and the other JuF compounds make up another stream — members of Jamaat ul-Fuqra are required to send 30% of their income home to the sheikh. When you add in the proceeds from all the alleged fraud and other criminal schemes, it’s clear that the sheikh has a nice little racket going.

Jamaat ul-Fuqra means “Community of the Impoverished” in Arabic. Somehow I don’t think Sheikh Gilani is actually a member of that particular community.

4 thoughts on “MOA on Parade in Binghamton”