Dymphna wrote on Thursday about a reader’s dissatisfaction with the lack of coverage in our blog of this year’s election.

She has sworn off dealing with the election until after both parties have their nominees in place next fall. But my disengagement from the spectacle has been less formal — my reactions vary through fascinated distaste, deep dismay, and disinterest, all of which combine to keep me from writing on the topic.

Before I explain my reasons fully, let me say this: Yes, I think it’s important that John McCain defeat whoever the Democrat nominee will be. So it’s time once again to hold my nose and vote for the Republican, and this year I will have to take an entire package of clothespins with me into the voting booth to accomplish the task.

It’s important to keep either Democrat from winning. But it’s not as important as many people think it is, and the long-term effect on the political momentum of this country will be minimal.

The permanent political class in America has nailed our rudder in place, and the ship of state is headed in a direction that will not easily be changed. The media focus is on the presidential candidates, and the big horse race, and who’s in and who’s out, but the real decisions are always being made by others. Congress, the Federal Reserve, the nameless functionaries in the permanent bureaucracy, the mandarins of the MSM who determine what the average American believes about what’s happening — these are the people who control the direction the country is headed in.

Without a leader of real character in office, the presidency is just a bit of froth on the surface of things.

If Barack Obama is as bad as many people fear he is, he will have little effect in the long run. He’ll get a lack of cooperation from Congress, resistance from the bureaucrats charged with carrying out policy, plenty of bad press, and a rejection at the polls in 2012.

If he’s not as bad as people say, then he and Hillary are effectively indistinguishable. Each will hustle the country more quickly into socialized medicine and bankruptcy. Each will govern from the position of prim politically correct self-righteousness, and hand large chunks of major executive policy over to unaccountable transnational bodies such as the UN. Each will find in the EU a worthwhile model to emulate, and each will do damage to our national defense and American interests overseas.

But John McCain is just as willing as they are to let unchecked immigration continue. He has shown himself to be almost as much an enemy of free speech as either of his possible opponents. He’s no friend of small government, and he has no more plan to deal with the coming Social Security/Medicare catastrophe than any of the Democrats.

His only advantage, and it is a significant one, is that he is unlikely to flee from Iraq and Afghanistan, and will therefore postpone our overseas disasters for a few more years.

But none of the major candidates for President is addressing the most important and pressing problems that face us. Continued mass immigration and the imminent collapse of the New Deal/Great Society welfare state are our most urgent issues.

Ten years from now these problems will be cutting through our national politics like a scythe, and the issues which are preoccupying us today will be forgotten.
– – – – – – – – –
And none of the major presidential candidates has addressed these grave threats in any serious fashion.

For the past two and a half years I have been educating myself about the situation in Europe. Everything I learn adds to my conviction that Europe is the most important front in the struggle against the Great Jihad. It’s more important than Afghanistan, or Iraq, or even Iran, because the heart of the current conflict is the information war, and we are in the process of losing the information war in Europe, thanks to the active connivance of the EU.

All the great crises that will be coming our way in the next quarter century — our colonization by masses of unassimilated immigrants, the engorgement of our central government, our demographic implosion, the inevitable collapse of the welfare state, and the erosion of civil liberties — are also coming to Europe, and they are coming there sooner. In fact, in places such as Sweden and Britain, they have already arrived.

If you want to read the tea leaves and find out what will be happening in the USA in ten or twenty years, look at what’s happening in Europe right now. And what makes Europe doubly important is that the unassimilated immigrants there are not illiterate Mexican peasants, but Muslims from the Middle East and North Africa who are being radicalized by Wahhabist agitators, especially among the youngsters of the second and third generations.

When the “youths” reach critical mass in Western Europe, when the intifadas spread unchecked and spark inevitable civil conflicts, the fate of the entire West will hang in the balance, because the winners will be sitting atop German wealth, British technology, and French nuclear weapons. It’s not a game of small-stakes poker we’re looking at across the Atlantic.

And when you contemplate what’s happening here in our ghastly over-extended election season, all our brouhaha seems that much more trivial in comparison.

It’s not just a preoccupation with evanescent trivia, it’s a con game, and the American electorate is being scammed. 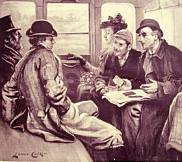 So you’ve got the Bammer versus the Hammer, and the Maverick versus both of them. But the game itself is rigged.

Our game is three-card monte, and it doesn’t matter which card you point to, because it won’t be the card you think it is when it’s finally flipped over.

Not only that, your two bits will always end up in the pocket of the con man holding the cards.