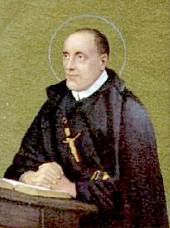 Today is the feast day of Clement, the patron saint of Vienna.

Born in Moravia the day after Christmas, 1751, Saint Clement came into the world as John Dvorák. His father was a butcher; John was the family’s ninth child. Moving to a Germanic area, the family name changed from Dvorák to Hofbauer, though it was not to be the last name change for John.

Mr. Hofbauer died when John was six; his hope to become a priest died, too, as the family could not afford the ecclesiastical education such a desire would entail. Instead, he became an apprentice baker at a monastery in Bruck. For a while, he lived in a hermitage until they were abolished by Emperor Joseph II.

John continued his work as a baker in Vienna, but made three pilgrimages to Rome. Third try lucky: someone offered to sponsor his priestly education. By then John had taken the name Clement Marie and had joined the Redemptorist order in Rome. He was educated in both Vienna and Rome before his ordination in 1785.
– – – – – – – – –
Clement was assigned to Vienna, but he traveled as a missionary to Poland, taking several companions with him. They worked with the poor, built schools and orphanages and doing what Redemptorists do best: preaching.

[Any American Catholic from the late 19th century to the mid 1950’s will remember those long, long “Forty Hours’ Devotions” which descended onto their home parish annually for a Catholic-style revival. Those priests were members of the Redemptorist order.

The only thing I remember from their sermons is a Redemptorist saying to the children, “You know the Beatitudes, don’t you?” And the answering singsong chorus of “Yes, Father.” “Well, guess what, kids,” the priest would reply, “Blessed are the meek” does not mean what you think it means…” Those guys could preach; by then we were waiting to hear the secret message encoded in “Blessed are the meek…”]

Clement sent missionaries to Germany and Switzerland. However, Napoleon suppressed religious orders and tossed the leaders into prison. Clement spent 1808 behind bars before being expelled to Austria.

He spent his remaining years in Vienna, helping to build a Catholic college and working against the establishment of a national church in Germany.

In 1820, the man known as The Apostle of Vienna – Clemens Mary Hofbauer – died of natural causes. He was canonized in 1909 by Pius X.

Information taken from The Catholic Calendar of Saints. Wikipedia has good information on the history of the order of the Redemptorists, also known as the Congregation of the Most Holy Redeemer.

4 thoughts on “The Patron Saint of Vienna”