Our Danish correspondent TB reported in last night with this message: 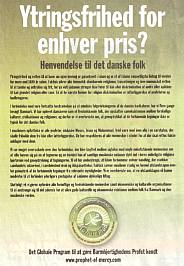 Today a campaign by an organization called “The Prophet of Mercy” has been launched in the Danish media.

They have advertised in major newspapers, arguing with the rhetorical question: “Freedom of speech at any price?”

Referring to “fire in the streets” and “murder plans” and then “condemming any act that weakens the security of society”.

Now Danish politicians have started to comment on these veiled threats. Conservatives calls this announcement “Mafia-methods” and a “an attempt to threaten Danish authorities, who will never bow to such threats”.

I have translated the message that was announced in the ads, and have scanned the advertisement itself and attached it. This particular ad was from Jyllands-Posten, but it also appeared, in identical form, in Politiken and other large newspapers. They certainly have used some money on this one.

The language was a little odd, though. The “Danish” imam Abdul “Stoning” Wahid Petersen helped these people write this message.

ATTENTION: Freedom of speech is now invented by the Muslims… :o)

Below is TB’s translation of the advertisement:

Freedom of speech at any price?

Freedom of speech and the right to have your own opinion is guaranteed within Islam and is one of Islam’s most important contributions to the world from more than 1400 years ago. Actually, all heavenly revealed religions, faiths and laws guarantees man the right to think and express himself freely as long as these expressions do not lead to mocking or discrimination against others or encourage religious or racial hatred. One of the worst kind of religious discrimination is to ridicule the prophets or the messengers.

In furtherance of our continued struggle to mitigate the consequences of the Danish caricatures we have visited Denmark several times. We have experienced the Danes as a peace-loving people who value coexistence between different cultures, civilizations, and religions, and we are therefore convinced that the reprinting of the insulting caricatures is not typical of the Danish people [Guess we have to disappoint them on that one —translator].

From the point of view of Muslims, all prophets, including Moses, Jesus and Mohammed, peace be upon them all, are in a special category which should protect them against mocking and ridiculing. They should be respected by all human beings instead of being exposed to false accusations.

We were very surprised by the connection which was drawn between the charges against some individuals who wanted to take revenge on one of the artists and a deliberate mocking of every Muslim nation deep in their innermost religious heart by reprinting the drawings. We would here like to emphasize that Islam condemns any act that weakens the security of society, especially killings and arson. As a matter of fact, Muslims still lack a formal disavowal of the reprinting of the drawings from relevant authorities. We are convinced that such a dissociation would help to prevent a repeat of such unhappy reactions.

Finally, we would like to encourage all sensible and peace-loving people as well as economic and cultural organizations to do their best to secure good cultural and economic relations between people from Denmark and the Muslim world.

The Global Program to make the Merciful Prophet known
www.prophet-of-mercy.com

18 thoughts on “The Prophet of Mercy”