Our Flemish correspondent VH wrote us this morning with a roundup of the latest Jihad-related news from the Dutch political scene:

Today in a national newspaper, it was revealed that the Dutch Islamic Federation (NIF, offline at the moment; see: http://www.nifonline.nl/) not only demands apologies of Wilders, but money as well.

The NIF, Hollanda Islam Federasyonu is a Turkish Nationalist immigrant organization, connected to Milli Görüş, and is suspected of having ties with the Muslim Brotherhood. Some accuse Milli Görüş of pretending to be “liberal” when the doors are open, but extremist when the doors are closed, saying: “War upon all those who ignore the haram, the religious prohibitions of Allah!”. The usual kitman.

“Not even a second of Wilders’ film is out yet,” the newspaper writes, “and a Turkish organization already demands an apology from Geert Wilders or otherwise that he should be convicted and have to pay heavy fines.” The Turkish organization NIF not only requires that Wilders be silenced and a ban imposed on his anti-Koran film Fitna, but also a public apology from the PVV leader to the Muslim population: “To avoid a penalty payment of €50,000 per day, Wilders should publish a ‘rectification’ on the front page of two national newspapers, in which he is to declare that his remarks about Islam, the Koran and the Prophet Mohammed are “inappropriate and an unnecessary offense’. The ‘rectification’ should end with an expression of regret.”

This civil case, which is planned for tomorrow (Friday), has been transferred from The Hague to a heavily protected courtroom in Rotterdam for security reasons. That courtroom in Rotterdam was set up especially for court cases against extremely dangerous criminals and terrorists like the murderer of Theo Van Gogh.

Wilders yesterday called upon his supporters to aid him financially.

According to Wilders on his weblog, his party is encountering “enormous costs” because of the film and its aftermath. Already many court cases are being filed and prepared to silence Wilders one way or the other and the lawyers’ bills must be piling up in his office. The Dutch government yesterday made it clear they decided not to go to court to ask for a ban on Fitna. They don’t need to, because they already set Islamists and appeasers in motion, like the NIF, who are eager enough to do the dirty job for them.

In addition to Wilders, Ehsan Jami, the Dutch immigrant apostate who got kicked out of the Socialist Party (PvdA) for becoming an apostate (many Socialist party voters are Muslims) and for founding a Committee for Ex-Muslims, and under 24/7 protection because of death threats, announced that he will release a film on April 20th. His film will be a cartoon called The Life of Mohammed. The story will depict Mohammed walking to a mosque, accompanied by his nine-year-old child bride Aïsha, to deflower her there. Muslim representatives of the Muslim-advisory Board to the government (CMO) immediately announced that they will take him to court for it.

There is a good chance that all traitors, appeasers, and Muslim thickheads in the Netherlands have had their two seconds of “fame” now, but one was afraid of being forgotten: Hans van den Broek, the Christian Democrat, former EU official, former Minister of Foreign Affairs and now Minister of State in the Queen’s advisory board. This van den Broek was one of the instigators of the boycott of EU member Austria in 2000, when the conservative Joerg Haider of FPÖ was elected to parliament and joined government. 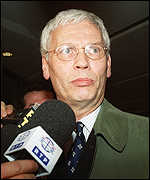 Van den Broek then showed himself to be nothing but a anti-democratic creepy little fascist dictator pur sang, and jumped up again in the same role yesterday to ask for a ban on Fitna… As if there are not enough bans by now. Van den Broek called Wilders’ struggle “political pyromania”, and that is reminiscent an earlier statement from him in which he accused anti-Islamists of wanting to light a match in a powder-depot (thus without realizing it comparing Islam to a powder keg).

Maybe this Hans van den Broek offered an interesting idea. It is time to light matches:

Yesterday history researchers made public studies showing that more than half of the population in the Netherlands is of the opinion that the Islam is a threat to Dutch identity, and also does not agree with Princess Maxima (the Argentinean wife of Crown Prince Alexander) who last year stated that Dutch identity does not exist.

But the most interesting finding of the research is that 57% of the Dutch consider the importation of huge numbers of (Muslim) immigrants in recent decades to be the biggest mistake ever made in Dutch history.

Sietze Fritsma, the immigration specialist for Geert Wilders’ PVV, asked the government if they agree with that, and called for a parliamentary hearing: “Do you realize only the Dutch ‘elite’ embraces this horrible Multiculturalism, and that the ordinary citizen is sick of the daily trouble, street terror, crime, and deterioration that many immigrants bring with them?”

9 thoughts on “The Biggest Mistake Ever Made in Dutch History”