A blogger in Finland has been fined for writing offensive material about Africans. 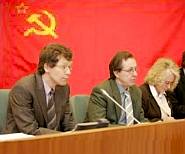 A court sentenced the 30-year old Espoo resident to a fine for inciting racial hatred. It found that the man’s writings on the Internet constituted illegal propaganda.

The judgment ruled that the man slandered Africans by comparing them to animals. In his defense, the man said that laws governing freedom of speech protected his right to express his opinion.

The blogger thought he was protected by the right of free speech, but he was mistaken. With the possible exception of Denmark, freedom of speech does not exist in any European country. The right to speak freely is subordinate to the right to practice one’s religion freely, and to be free of racial discrimination. Both of these “rights” are conveniently used to suppress anyone who questions Orthodox Multiculturalism.

The story doesn’t mention the name of the blogger, but he is in fact Mikko Ellilä.

I wrote extensively starting in May of last year about the efforts of the Finnish authorities to silence Mikko Ellilä. Mr. Ellilä made the unpardonable mistake of holding opinions about immigration and racial issues which the state found unacceptable.

The legal process against him started with a summons to talk to the police. After that it looked like nothing much might happen, and there were some among our commenters who claimed we were making a lot of fuss about nothing, and that Mr. Ellilä was bound to be released.

But it didn’t work out that way. The matter was referred to the State Prosecutor, who brought the case to trial, and Mr Ellilä was convicted. It’s the second such case in Finland, and will draw the iron curtain of censorship down even tighter over Finnish anti-immigration blogs and websites.

Another aspect to the case, is whether he should have been forced by a court to have to explain his views at all. The Finnish State Prosecutor’s line of questioning: “what was your intent”, should send a chill up everyone’s spine, no matter what the issue is about. This scaling back of liberal freedoms — if it isn’t overturned by a higher court — comes at a crucial time when civil liberties are under attack by those who want to limit what one can say about Islam.

Turkkilaista tuumintaa has major portions of the trial transcript translated into English. KGS includes a caveat that Matias Turkkila made his partial transcript from notes rather than a tape recording, so word-for-word accuracy is not to be expected.

[Defense attorney Kari] Silvennoinen: One of the offences mentioned in the preliminary investigation was that you had compared ethnic groups to animals. Is this the case?

Ellilä: No. I haven’t compared any ethnic groups to animals. I merely stated that man — as in mankind — is an animal, homo sapiens, which is of course a fact known to everyone.

Silvennoinen: How about the word “parasite”, which you use at one point?

Ellilä: In Finland, the word “parasite” [“loinen”] was originally a socio-economic term used in 19th century agrarian society, where terms such as “peasant”, “tenant farmer”, “parasite” etc. were used, this last group being people who lived at the expense of others. It was only later that this word came to be used of lice and other insects, and it’s still used colloquially in the socio-economic sense in political discourse, in newspaper columns and such. It’s not the kind of word that politicians would use, but then, I am not a politician, but a private citizen.

Silvennoinen: Did you have any intentions of inciting or offending?

Notice that Mikko Ellilä’s defense comes down to what he intended. As it happens, such a defense proved inadequate — evidently the court determined that Mr. Ellilä’s intentions were not benign, and ruled accordingly.

But let’s suppose for the sake of argument that Mikko Ellilä’s inner thoughts and intentions are in fact vile. Let’s pretend that he really thinks that Africans are no better than animals, that Jews are sub-humans, and the Suomi-speakers of Finland are the most evolved race on the planet.

I would find such opinions repugnant. I would decline to read his writings, and I would give his theories no credence.

But that’s not the issue.

The issue is this: Freedom of speech means the absolute right to say truly repugnant things.

Otherwise it has no meaning. If we are only free to say “The Emperor’s clothes are gorgeous and delightful,” then we have no free speech whatsoever.

The lamps are going out all over Europe; we shall not see them lit again in our lifetime.

19 thoughts on “The Ordeal of Mikko Ellilä”