Everywhere they go, the Danish Mohammed cartoons cause uproar and consternation. Their most recent appearance was yesterday in Brno.

Our Czech correspondent Viktor Svoboda sent us this report: 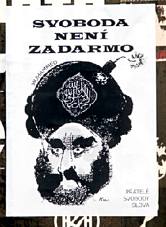 Yesterday (March 19) dozens of posters showing the cartoon of Muhammad with a bomb in his turban appeared on the streets of the Czech city of Brno. The posters say “Freedom does not come for free” and are signed by “Friends of Freedom of Speech”.

Czech Foreign minister Karel Schwarzenberg told the press, “The Prophet did not know a bomb in his time; it’s pure mockery. Such posters are in my opinion an expression of intolerance and aggression on the part of those who posted them. It’s a sad fact that something like that appeared in the Czech nation.”

The foreign ministry condemns the posters’ creators, saying that they are abusing freedom of speech. “Public expressions motivated by attempts to stir up religious hatred cannot be defended on the basis of free speech,” said the press spokeswoman Zuzana Opletalová. 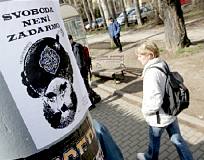 Chairman of Islamic Foundation in Brno, Muneeb Hassan Alrawi, sees the posters as a provocation. “It’s a pitiful attempt to provoke Muslims. They don’t care about freedom of speech at all; they are just trying to mock us.”

Muslims will discuss whether they will contact police about the issue. “We will not give them the satisfaction of making strong protests. We will discuss it, and in the next days we will decide whether it makes sense to contact the police”.

Police started to look into the issue anyway. “We will let experts examine the poster, then we will decide whether it should classified as a crime of supporting and promoting a movement with the purpose of suppressing the rights and freedom of people,” said the police press spokesman Bohumil Malášek.

The text above is composed from several news reports from the Czech MSM.

There’s much more info about this on “Politically Correct Front” in Czech, but unfortunately I don’t have time to translate it all. If you have somebody who can, there are some interesting interviews here.

Here is an official government statement.

You can find some photos here, here, and here.