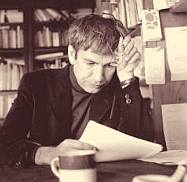 Orhan Pamuk is a Nobel prize-winning Turkish novelist and university professor who gained international attention back in 2005 when he was put on trial for “insulting Turkishness”.

He committed his thought-crime during an interview in Switzerland, when he said, “Thirty thousand Kurds, and a million Armenians were killed in these lands [Anatolia] and nobody dares to talk about it.” Later he added, “What happened to the Ottoman Armenians in 1915 was a major thing that was hidden from the Turkish nation; it was a taboo. But we have to be able to talk about the past.”

After charges were filed against him, he remained defiant: “I repeat, I said loud and clear that one million Armenians and 30,000 Kurds were killed in Turkey.”

Eventually the charges were dropped due to a technicality, and Mr. Pamuk was never punished for his insults. But his statements have made him into a permanent enemy of many Turkish nationalists.

Today brings news of a plot against Orhan Pamuk’s life, and the background to the latest incident reveals the complexity of the current political situation in Turkey. It’s not a simple matter of militant nationalists versus elite modernists: there seems to be a three-cornered struggle to define the essence of modern Turkey.

First, an account of the plot as reported by AFP:

A Turkish nationalist party leader, a veteran journalist and an academic have been arrested over an alleged plan to kill author Orhan Pamuk, the country’s first Nobel laureate, media reported Friday.

Dogu Perincek, the leader of the Workers’ Party, senior journalist Ilhan Selcuk and Kemal Alemdaroglu, the former rector of Istanbul University, are in detention and are to appear before a public prosecutor, the Anatolia news agency said.

The news agency did not specify any charges against them but said they had been detained for their alleged role in an ultra-nationalist plot to kill Pamuk and senior Kurdish figures.

Notice that the alleged conspirators targeted a “pro-Islamist journalist” in addition to Mr. Pamuk. That is, the group’s enemies include people that we in the West would consider polar opposites: fundamentalist Muslims and secular modernists. But secularism in Turkey assumes more than one form, and the plotters represent the Attaturk version: both non-Western and anti-Islamic.

Throw in the would-be Kurdish victims and you get a glimpse of the full range of foes from the viewpoint of modern Turkish nationalism.

In 2007, a Swiss court convicted [Dogu] Perincek of racism for denying, during trips to Switzerland, that the mass killing of Armenians in the early 20th century was genocide.

The detained journalist, Ilhan Selcuk, writes a column for the secular Cumhuriyet newspaper and is a fierce critic of Prime Minister Recep Tayyip Erdogan’s government. Military-backed circles of power, which include the state bureaucracy and judiciary, suspect Erdogan and his allies seek to inject Islam into political life, undermining the secular principles outlined in the constitution.

The government denies it wants to erode secularism, citing reforms it has made to try to gain membership in the European Union.

To summarize: the government is denying that it is anything but secular, and Orhan Pamuk fears for his life, all because of the machinations of Turkish nationalists.

And where do these nationalists do their recruiting?

The media reports said the plans were allegedly hatched by an “ultra-nationalist” group thought to be linked to the security forces.

So a quasi-military group is targeting both religious extremists and free-thinking intellectuals in its mission to protect the national culture.