Our expatriate Dutch correspondent H. Numan has the latest on fashionable Islamic swimwear in the Netherlands.

Swimming to a Shariah State
by H. Numan 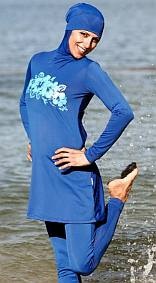 For the last few weeks we have witnessed a new taqiyya-program swimming towards a Dutch shariah state.

Someone invented a special Muslim bathing suit so Muslim women would be able to swim. This suit is called a “burkini”. It looks very much like a wet suit, but it isn’t made of neoprene. Muslims grabbed this God-given chance, and have pushed for legislation to allow this dress.

Public swimming pools explicitly forbid fully-dressed swimming, both for health and safety reasons. For example, I am not allowed to wear a wet suit practicing scuba diving. Only if I or my diving club rented the whole pool could we train in wet suits.

For exactly the same reason several Muslim women were kicked out of the pool. This happened in Enschede last week, amongst other places.

This created, not very surprisingly, a huge outcry of protest. “Discrimination!” “A nice Muslim initiative to integrate into society is nipped in the bud!” And more of those politically convenient words.

As usual, the Enschede municipality (in this case) caved in immediately and allowed Muslim women to swim in a burkini. Other cities will not wait so long, and allow the wearing of religious clothing in the pool. Everything must be politically correct!

Since this item is hot in the news, producers can’t even meet demand. Seems like everybody and the dog must have such a misogynistic dress.

I can’t see any reason why, as most Muslim women will never be allowed to go unaccompanied to a pool. But anything that is controversial carries the lure of forbidden fruit. In this case, women rush to buy a new type of chastity belt. Very fashionable, you know!

Now, let’s have a closer look at things. And discover this is a taqiyya tactic pure and simple.
– – – – – – – – –
First of all, Muslim women are not allowed to bathe in the presence of men. No matter what.

In all Muslim nations, bathing is strictly separated based on sex. One pool for men, one pool for women. The twain shall never ever meet! In more strict Muslim countries, even beaches are separated. Usually with screens of curtains. So men, easily aroused as they are, cannot be tempted by the sight of bathing women.

Next, those women should wear clothes that do not draw any attention to their shape. Which of course explicitly forbids wearing a burkini. A woman swimming in a burkini looks like Miss Wet T-Shirt. With the difference that a burkini is a much tighter fit… If women really want to swim, they should wear a burkha. Burkhas do not, even when swimming, reveal the body shape.

Which means that Muslim women who go unaccompanied to a public pool are no better than harlots. Especially if they choose to wear body-revealing clothing — such as that burkini. Those kinds of women are punishable by Muslim law. Read the Koran and the hadith and you find plenty of jurisprudence for it. The only Muslims outside Europe who would support burkinis are the ones that would support Miss Wet T-Shirt competitions.

We don’t hear even one word about that. Of course not. That would be politically incorrect.

Instead, we hear the Left howling about discrimination and how this burkini promotes integration of Muslims into Dutch society.

Imams are remarkably quiet now. Should one ask an imam what he thinks about burkinis, he would answer that a stoning is in order. Therefore, nobody asks. Nor are imams eager to forbid this swim suit. It promotes their cause, even if they disapprove of it.

And that, folks, is why burkinis are just a piece of taqiyya to subdue the West.

8 thoughts on “Swimming to a Shariah State”