Last month I posted a translation of a lead article by from Politiken by the Danish writer Mogens Rukov. Henrik of Europe News has translated a new piece by the same author, this one from last Friday’s WeekendAvisen (the original requires subscription).

Islam: In violation of our constitution

A message from God

By Mogens Rukov
Director of the screenwriting department of the Danish Film Academy
March 14th 2008, WeekendAvisen 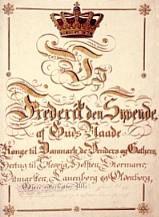 The great tolerance being displayed in Europe these days is directed towards Islam.

Islam is being recognized, and Muslims are awarded full citizens’ rights. Tolerance has never been greater. But this period in time can be compared to the late 1930s, where the leading nation, Great Britain, spared no effort to accommodate the megalomaniacal plans of Hitler. Back then tolerance was a political decision. And it was a gigantic political misunderstanding, which led us directly to WWII.

At present, tolerance is culturally determined and well founded in public opinion. Very few Europeans are in significant disagreement with the policy that faith is a private matter for the individual. And relative to this notion — shared by the author of this article — the tolerant attitude towards Muslims is a matter of cause. But is this also the case towards Islam?

Islam is a law-based religion, to a much greater extent than any other religion we know of. And utterly incomparable to the Jewish religion that is also called a law-based religion by some. The Islamic law of faith, Sharia, is also the civil law of Islam. The main offering of Islam is to replace other legal systems with Sharia. As a Danish-speaking imam stated recently: “You request me to condemn stoning of women, but what can I do, when my god demands stoning of women?”

He is completely right. What can he do? The learned authorities of his religion have throughout time formulated sentences of faith, commands, bans etc. in a way that bestows divine status upon the entire legal complex. “It is my god saying so.” He cannot circumvent the direct request from his god. And he hereby invokes an authority of higher standing than the law we have, which is given by mere humans, influenced by Roman law and Christianity.

But do we want a civil law like this? What we are finding is that it cannot be the same god in the monotheistic religions, but actually radically different gods.

As the American literary researcher Harold Bloom aptly expressed it in “Where Shall Wisdom be Found?” (2004): “Christians believe in, Muslims submit to, and Jews have confidence in — the will of God.” Believe in, submit to, have confidence in is an elegant characterization of the different demands put upon us by our gods. Therefore it is utter nonsense that for political reasons some claim that we ultimately worship the same god.

But now some strangers arrive and demand that we replace our legal code, our understanding of law, our legal consciousness, in part or in whole, piecemeal or completely, step by step or by leaps and bounds. I decline politely but very firmly. Would I then be intolerant?

Recently a book entitled “Tolerance” was published. According to this, ‘Tolerance’ is defined as:

1) That the object in question is repugnant to someone. 2) That its existence is permitted nonetheless.

A third item is that one must have a certain amount of humorous attitude towards oneself, some self-irony that permits one to realize the limits of ones own values.

However, this has precisely nothing to do with tolerance. And it shows that these persons from the intelligentsia plain do not understand what tolerance is.

Tolerance is a double security, it goes both ways. It ensures the existence of the minority, and it ensures the law and order of the majority.

This is still the way things are.

And in particular as it pertains to matters of faith. For this reason, no open freedom of faith is given. Freedom of faith is not, as people of Islam and their proselytes would claim, a carte blanche of free faith. The intelligentsia, some politicians, journalists, and Muslims are practically jumping over each other to open the gates for a counter-culture, a different culture, a culture in radical opposition to the Nordic, Western, and democratic.

They are applying a means: The Danish constitution. According to the constitution, they claim, there is freedom of religion in Denmark, including freedom for a faith like Islam. This is a fallacy. They do not understand the sense of tolerance, which means upholding and furthering law and order. They have not read the relevant articles of the constitution on freedom of faith, they are calling upon. I was myself surprised reading them.

A faith freedom permissive of a counter-culture like Islam does not exist in the Danish constitution. It is simply not open to it. The constitution has, for sure, an article about freedom of faith. But this is a conditional freedom. The freedom is not open and hollow. The condition is that the religion is constructed so that that “nothing will be taught that contradicts decency and the public order.” It is specific that nothing of the kind must be taught. If a mosque teaches stoning of women, distrust in democracy, disdain for adherents of other faiths, permission to kill them, Sharia etc., then this mosque is not covered by the articles on faith freedom in the Danish constitution.

Tolerance and the conditions for tolerance are so closely connected that they are told without any pause, in the same breath.

The entire article 67 of the Danish constitution reads: “Citizens have the right to unite in societies to worship God in the way that matches their conviction, provided that nothing is taught or done in violation of decency or the public order.”

This point of view is elaborated in further paragraphs, where it is also stated that nobody may, due to matters of faith, be excused from their normal duties as citizens (article 70).

This excludes Islam. Islam has an alternative notion of decency and public order, a notion that contradicts that of the Danish constitution. The humanitarian ideal that our constitution is based upon is being undermined and rejected by Islam. Not by Islamism, not by any radical interpretation of Islam, but by Islam proper.

We have to extend our tolerance. Not to accommodate Islam, but to make sure that it really safeguards what the American social scientist Lawrence E. Harrison sees as the foundation for the Nordic development of society: “The most important force behind the Nordic development is culture — values, convictions and attitudes — that further democracy, social justice, and creativity.”

14 thoughts on “Islam: In Violation of Our Constitution”