News stories for this report were collected from The Daily Mail, Times Online, The Telegraph, The Sun, and Melanie Phillips at The Spectator. They were used in compiling this post. Since the incident has some anomalies and contradictions, not to mention the long lapse between the event in question and any release to the media, it seems best to go with a straightforward narrative while leaving the links in one place for your further perusal. Who knows, you might spot some egregious behavior I missed. 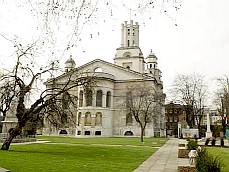 The basics are this: Canon Michael Ainsworth, age 57, the vicar at St George-in-the-East Church in Wapping, East London, was viciously beaten by “Asian youths” when he came out of the church and asked them to quiet down during the services. Their response was to beat his face to a bloody pulp and kick him when he was on the ground, editorializing all the while on the needless existence of both the vicar and of the church. The latter, they claimed, ought to be a mosque.

Ainsworth was treated at St. Bartholomew’s Hospital and released, only to return later because of the loss of blood. The Canon’s wife, Jan Ainsworth, is also an Anglican priest. Because of her appointment to the extremely prestigious post on the Church of England’s education board, the Ainsworths and their four children moved from Manchester to London.

So far, so good. However, it gets strange when you find that the attack happened on March 5th. Why was it not made public until the 14th? What gives here? Mrs. Ainsworth claims her husband didn’t want any publicity since it might cause tensions in the neighborhood. So we only have the wife’s version of events, taken from her Palm Sunday homily at St. George’s. She stood in for the Canon since he is still in hospital:

“There is a lot of shock and distress around the congregation and the area.”

She said the place in which the attack took place was a “vulnerable” part of the church’s grounds in which youths were known to congregate.

Mrs. Ainsworth added: “Quite clearly there are mindless individuals in every community, quite often under the influence of drink or drugs, that engage in random acts of violence.

Interfaith relations in the area are “very good” she said, adding: “We have had very strong messages of support from East London mosque and Tower Hamlets mosque.”

But she added: “It is obvious that it does contain a religious element.”

“A religious element”? Ya think?

As for the “strong messages of support” from the two mosques she mentions, for some reason no media outlet chose to report them. Does that not strike you as strange?
– – – – – – – – –
In assessing this phenomenon you have on the one side ostriches like the vicar’s wife, and the eagles, like the insurance companies, on the other. I cannot access the National Churchwatch webpages – only a cached page can be seen, but here is a second-hand statement in the Telegraph:

A survey of London clergy by National Churchwatch, which provides personal safety advice, found that nearly half said they had been attacked in the previous 12 months. The organisation suggested that vicars should consider taking off their dog collars when they are on their own.[NB: I loathe the expression “dog collar.” It’s amusing the first time you hear it, but two decades on it begins to point to the insensibilities of the speaker. It’s a clerical collar. Get over it, you anti-clerical reporters. Not to worry, no one will mistake you for a Christer if you use the correct terminology. In fact, people will think you have a vocabulary somewhat past what you picked up in adolescence.]

Now there’s some lame advice for you. A vicar is in the middle of a service and goes outside to ask the rowdies to cool it. He’s wearing his clerical collar, and probably an alb and stole. So in order to speak to these vandals, what is he supposed to do? Run into the sacristy, strip off his Anglican vestments, throw on some Pakistani garb and go outside to address the creeps in Urdu, bowing and scraping all the while? How long, Oh Lord, how long?

The cached page I found on National Churchwatch gives this synopsis of its mission:

Nick Tolson is a former member of the RAF Police and was a Police Constable with the Hampshire Constabulary. In 1991 he became a verger in Wells Cathedral where he was tasked with keeping good order in church. In April 2000 he became the National Churchwatch Co-ordinator.

Nick is the UK’s leading expert in Personal Safety for Clergy and is the National Churchwatch Co-ordinator. He is currently advising the Church of England and Church in Wales about personal safety issues for their clergy and has advised the Home Office, the House of Lords and Heath & Safety Executive about Clergy Safety.

Nick runs more than 50 seminars a year for all Christian denominations on clergy safety and other church crime issues. He is a Suzy Lamplugh Trust Personal Safety tutor and is a qualified Adult Education teacher.

Nick is the author of “The Complete Security Book for Churches”, (published by Warminster Press) “The Pocket Book of Personal Safety for Clergy” and “ClergySafe”. (Published by Lulu Press) He has written many national newspaper articles, on TV & radio and is a regular contributor to Security Professional Magazine.

In 2007 Nick published “The Clergy Lifestyle Theory”, an academic work looking at the reasons for violence against clergy and some essential recommendations for dealing with it. It is now being used as a good example of the practical application of criminological theory by Universities around the UK.

As a former police officer Nick has assisted Dioceses and other church organisations in investigating issues such as hate letters, e mail abuse and other sensitive crimes that often involve church members. He gives advice on conflict management and methods of dealing with internal issues that are potentially criminal.

National Churchwatch came into being following a national conference in 1999. With the support of Ecclesiastical Insurance and four other insurance companies National Churchwatch began to offer seminars to churches and other religious organisations in April 2000 after the appointment of Nick Tolson as National Co-ordinator.

Since this time National Churchwatch has run approx 60 seminars a year dealing with church security and the personal safety for church workers and clergy. They have advised the Home Office, the House of Lords, the Health & Safety Executive and many religious organisations since 2000.

Having started with mainly church security seminars the organisation now concentrates on personal safety after the realisation that there were no other organisations in the UK that could provide the specialist advice that churches need.

National Churchwatch is a non profit making company and intends to develop over the next few years to be able to advise even more church people about personal safety and to try and prevent yet more deaths, injury and problems.

Despite the protestations of the ostriches, this is a serious, ongoing and increasing problem. Those whose job it is to protect the public are hampered by laws which prevent them from doing so.

And it gets worse. Remember the dust-up when the military told the members of a base in eastern England not to wear their uniforms off-base? Here’s the CNN version:

British Royal Air Force commanders are urging more than 2,000 personnel at a base in eastern England not to wear their uniforms in public after the troops reportedly faced months of verbal attacks from nearby anti-war residents.

Airmen and women at Wittering air base, located 150 kilometers (90 miles) north of London, have allegedly faced seven months of verbal attacks from residents living in the nearby city of Peterborough who oppose the wars in Iraq and Afghanistan.

Britain’s Ministry of Defence confirmed soldiers had been ordered to wear civilian clothing when visiting the city.

The alleged attacks have not escalated beyond verbal abuse, the ministry said.

However, a video by CNN says one man’s house and car were attacked. Shall we just call everything “verbal abuse”?

So the Canon’s wife wants this kind of attack to be seen as unusual. Yet The Ecclesiastical Insurance Group sponsors National Churchwatch. The latter has printed safety manuals for clergy to address this rare problem.

Just scroll through the news stories up top to get an idea of the backing and filling the ostriches are doing in order to avoid facing just how dangerous it has become to profess allegiance to any church, government, or national group…or anything at all besides Allah.

Ergo, Britain is most lethally a failed state.

21 thoughts on “In the UK, the Time Has Come for Disguises”