Below is a guest post from our Dutch correspondent Michiel Mans. It was originally published on a Dutch site, but I don’t have a link.

Update: The Dutch version is at Het Vrije Volk.

Fruitcountry of the World
by Michiel Mans

It was a stiff competition to find out which country would become Fruitcake Nation of the World.

The staggering amount of absurdities, imbecility, draconian punishments, the general amount of legal, political and other nonsense coming from many countries made the job of choosing the ultimate fruitcountry a tough one for the jurors. 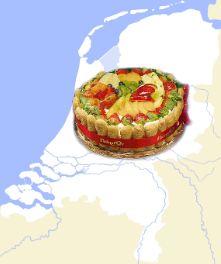 …the Netherlands. I know this comes as a surprise to some and certainly will upset the Saudis, probably cause flag burnings and embassy ignitions, but in spite of their gallant efforts, the Saudis lost. It must be said the death of Saudi schoolgirls who were pushed back inside a burning school by religious police for being improperly dressed was a good attempt indeed. Sentencing a women to flogging because she had a coffee with a colleague at a Starbucks scored points as well, but to no avail.

For some time it seemed Sudan was leading the race after their marvelous Muhammad the Bear affair, but since they couldn’t follow it up with a proper public execution of the slanderous lady who allowed the wicked naming practice, they fell back.

Indonesia learned from Sudan’s failure to follow up and entered their three young schoolgirls who were indeed found headless in the name of the God of Peace. However, they were disqualified over an unrelated corruption case involving the illegal chopping down of just about every tree in their country. The 2006 introduction of Sharia police in Aceh province didn’t impress the jury either since this backward lunacy is too common elsewhere.

The mercifully slow crane hangings in Allah’s name in Iran, though numerous, were insufficient to beat Iraq’s daily one hundred splattered all over the place for Allah’s sake, but these futile killings didn’t stand out among the mass of senseless slaughter in countries like Sudan or the Congo.

Although with only one killed, Theo van Gogh, a guy who called himself the village idiot, it still was the Netherlands which ultimately beat them all.

According to the jury it was, as one of them put it: “because never in human history, so much was wasted so fast, by so few, for so many.”

A country which went from being a beacon of enlightenment where people could speak freely, to a country where people’s words or expressions are silenced, obstructed or banned by politicians (or with their consent), including their Prime Minister.

A country where any opinion other than the multicultural one is branded as racism or fascism by almost anyone who is someone, or else you can forget your invitation from state funded Public Broadcasting TV.
– – – – – – – – –
A country in which the Islam is force fed to the population in small bites by the ruling elite because they believe all cultures are equal. If you don’t have an open mind about the closed minds of serious Muslims, or don’t like couscous, you are the one who should move (“You don’t have to live here.” — Mayor Cohen of Amsterdam to Ebru Umar, a columnist).

A country which until recently was secular after centuries of battles, but is no more.

It isn’t the dead guy who claimed to be, but the Prime Minister who turns out to be the village idiot. He is a compulsive ‘respect’-utterer who shattered our secularism in several ways, but the most striking way was his performance on Christian fundi TV channel ‘Hour of Power’ which was invited to come to his (our) official State residence in order to interview the PM. During the religious propaganda hour our PM said “without religion you cannot function” . It’s obvious that his respect doesn’t include atheists or agnostics. They don’t function.

A country in which the ruling elite liberally lubricates its own machinery but refuses to lubricate the machinations at the frontline of society. Policemen, nurses and teachers are by now better off shoveling dung. They were refused a well-deserved pay rise because “there was no money for it”. Nothing strange here, but money miraculously did materialize in abundance for our ministers’ pay rise (ultimately up to 30 percent) last year.

A country where many Muslims were allowed to settle and almost a million now live. Although their cultures and religious opinions certainly clash with the Dutch way of life, it isn’t the Muslims themselves who work the mechanisms of Islamization and get things done. No. By and large it is the ruling elite who commit cultural hara kiri and lead the Islamization of society.

They refuse to listen to arguments, refuse to read human history and psychology, and remain deaf to any and all who dare to be critical. It was this willing, almost happy path to suicide which made the jury choose Holland as the Fruitcountry of the World.

References (some in Dutch):

6 thoughts on “Fruitcountry of the World”