Blackfive says: Paratroopers Fighting in Afghanistan Need to Hear from You! 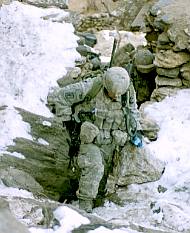 Not too long ago, Blackfive readers, joined by thousands of readers from other blogs, sent over 30,000 emails of support to Marines in Iraq. The Marines had to shut down the email address because you all were causing bandwidth issues with the support we were sending.

Now, as if the Taliban and Al Qaeda, bad weather, and lack of support here at home weren’t bad enough, the New York Times has published a one-sided view of the paratroopers tour in Afghanistan.

And so now, we have cause to band together again and send massive support down range. Here’s why:

Even though spring hasn’t officially arrived, the snow line is beginning to move up the mountains in Kunar and surrounding provinces in Afghanistan. The Taliban have already begun attacking the KOP, Firebases and Observation Points where elements of the 173rd Airborne Brigade Combat Team from Bamberg and Schweinfurt, Germanicenza, Ily, are deployed. Almost 4,000 Soldiers from 2nd Battalion, 503rd Infantry (Airborne), 1st Battalion, 503rd Infantry (Airborne) and 1st Squadron, 91st Cavalry were deployed to Kunar and surrounding provinces in Afghanistan in May 2007 for a 15-month rotation. This region of eastern Afghanistan in the Hindu Kush mountains bordering Pakistan has been designated the most dangerous place on earth for military personnel.

Fortuitously for the troops, they don’t have the leisure to read The Old Grey Trollop, that fine news organ which has been betraying the commonweal for generations, all in the name of their own brand of superior “what-the-public-needs-to-hear-is-whatever-we-tell-them” wisdom. Being the Times means never having to say you’re sorry, no matter how much harm your reporters have caused. Yeah, I do mean people like Walter Duranty, may he have the afterlife he deserves.

The Sky Soldiers have trudged through up to seven feet of snow on patrols day in and day out often at altitudes of 7,000 feet and higher. Each Soldier carries between 60 and 100 pounds of gear on these patrols. They Soldier-On each day despite the loss of many friends and comrades and substantially high numbers of wounded.

Black Five has specific directions for correspondence to the military in Afghanistan:

Our paratroopers are in the fight of their lives and they need to hear that America loves them.

Please send an email of support to
skysoldiers173rd@gmail.com

Or you can mail cards to:

Due to security reasons in Afghanistan please do not put addresses or phone numbers on any correspondence. All emails will be printed out here in the US and mailed to Afghanistan as they do not have the resources to receive a large number of emails. All letters and emails will be vetted to make sure there are no negative comments. These are letters of support, so please keep them positive and uplifting.

It’s hard to believe anyone could be so morally degraded as to send “negative comments” to someone doing dangerous, adrenalin -pumping work on their behalf, but I guess it does happen. Remember the teacher who had young school children send hate letters to soldiers serving in Iraq?

This pre-collection of emails is a good work-around for the problem.

If you want to send a box of goodies to the troops, here is one site that gives complete directions. It has how-to visuals to help you along if you haven’t done this before.

This is the email address for someone who can give advice if you haven’t sent any boxes before and would like some ideas on what to pack — and just as importantly, what not to include:

I wish we could do a fund-raising and purchase ammunition for the poor UK troops, who are miserably supplied. As Prairie Pundit noted in February:

The British have made a huge mistake in shortchanging their troops to spend money on social programs. They are also having trouble because of a lack of a defense industry to supply them. While they may think they should get priority over the Saudis, my guess is that the Saudis may be better customers.

You’d think government would be especially careful about supplies where Prince Harry is serving. However, since the news of his deployment was leaked, they had to pull him out to protect his team:

Emergency plans to extract Prince Harry from Afghanistan are being drawn up today [February 29th] after the news leaked that he had been on a secret combat tour in Helmand province since before Christmas (writes Michael Evans, Defence Editor, and Philippe Naughton).

After being denied the chance to serve with his unit in Iraq, the third in line to the throne was deployed in Afghanistan in mid-December. He has been working in Helmand province as a Forward Air Controller – responsible for providing cover for frontline troops – and has been personally involved in clashes with Taleban guerrillas.

His four-month deployment had been kept secret because of a Ministry of Defence agreement with news organisations, including The Times, but the details can now be made public after the news leaked out overseas and on the internet.

By the way, the Times link for this information has some video footage of “HRH Prince Harry in Afghanistan”. I recommend watching it. If any of our British readers could comment on HRH’s accent, I’d like to hear what they think. It doesn’t sound that much different than the voice of one of the other soldiers on the film saying what a boost in morale it was to have a member of the royal family serving with them. I had expected Harry’s voice to have a more distinctly upper-class quality to it. Maybe I’m just not able to distinguish it because the sound in these videos is poor (push the blue button on the far right of the screen to make the audio come on).

Since Harry’s not deployed anymore, this question is moot. Nonetheless, I wonder what one would put in a box for a prince?

2 thoughts on “Emails, Cards, and Boxes for the Military in Afghanistan”