I found out about this trendy little item of apparel from the Spanish blog La Yijad en Eurabia. No article in English seems to be available, so I translated this story in last week’s “7 Sur 7” from the French: 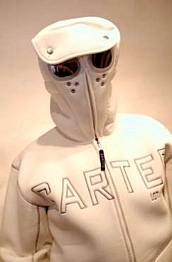 The jacket with sunglasses integrated with the hood, nicknamed “burqa for men”, is gaining increasing popularity among young Britons since it went on sale a few weeks ago, but the police are concerned with the anonymity it provides. “Within three only weeks, we have sold over 450 in my territory, “said Peter Webster, a representative in the south and south-east of England for the brand Carter. “The retail sector is very bleak at the moment, and yet the ‘goggle jacket’ has very good market”, he stressed.

The “goggle jacket” is a jacket with a hood that can be closed completely by using flaps to cover the entire face, with two sheets of reflective plastic for the eyes. It was nicknamed the “burqa for men” by a Sunday newspaper.

Available at several prices between £50 and £85 (€70 to €120 [ca. $110 to $190), at the moment they come in black, camouflage, cream, and… pink, and appeal especially to young men between the ages of 15 and 25. The design is based on a leather jacket from Italian designer CP Company, in a tribute to a car race between 1927 and 1957. This model of more than £600 pounds (€834 euros [ca. $1300]) has been worn by Liam Gallagher, a member of the group Oasis. The result is “funny and fashionable” for some, “frightening and disturbing” for others: models create a dark silhouette of a sniper or a commando and models obviously give the impression of having survived a biological or nuclear disaster.

At Chez Arrival, a store on the outskirts of Newcastle, the jacket is selling like hotcakes by word of mouth, even among girls.

“I sold sixty in three weeks, and fifteen Tuesday,” said Mark Chapman, the manager of the shop. “It is unusual, it’s hot, some are waterproof. The design is fun, it’s great clothing,” he added. In the vast Bluewater shopping mall in Greenhithe (East London), three shops are selling the jacket just as successfully.

In one week, the store base had sold all thirty copies. It now has 200 stocked in anticipation of Christmas. “It is a question of fashion. It is a look so different that it generates a lot of interest,” noted the manager of the store. Some buy for fun, others for skiing or their motorcycle, but not to commit illegal acts, assured the outlet stores and the creators. “We haven’t thought about a possible misuse. Anyway, there are a lot of clothes that people can wear if they commit crimes, a hood for example,” explained an official of the group Projekt NYC.

For Mark Chapman, it is not ideal apparel in which to commit a crime because “it’s hot in there quickly and the condensation forms on your glasses so you can’t see anything.” However, the simple act of crossing the street, since one looks more like a creature from Roswell than a human being, especially if it is in a group, may frighten many passersby. Not that the police could intervene. “There is nothing illegal about wearing this jacket,” said a spokesman for the Association of British Police Officers (ACPO), stating that for the moment no incident involving a wearer of a “goggle jacket” had been reported.

10 thoughts on “The Burqa For Men”