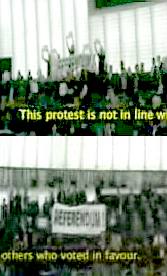 Yesterday I embedded a YouTube video of the protest at the European Parliament in Strasbourg on the occasion of the signing of the “Charter of Fundamental Rights”. The protesters held up banners and chanted “Referendum! Referendum!”

Sometime since then YouTube has removed the video. As anyone who watched it can attest, there was no sex, no nudity, no violence, no “hate speech”, and no copyright violations (except maybe for the music used in the soundtrack, and that’s a stretch) in the EU Parliament video. It was simply a recording of peaceful protesters chanting in unison against the creation of the EU superstate, and demanding a national referendum for the countries involved.

The video violates none of YouTube’s policies, yet it was removed.

The nature of the game is now clear: YouTube, like so many other online services, is a tool of the Powers That Be. Any dissent from the party line about the EU, Islam, and Multiculturalism is suppressed.

The mask is off.

KGS at Tundra Tabloids tells me that the Devil’s Kitchen has re-posted the video at a new YouTube location. I’ve updated the original embed to reflect the new link. We’ll see how long that one lasts.

Also, Heroyalwhyness, a Gates of Vienna reader and commenter, saved a low-resolution copy of the video, and I have it here on my PC. The one at YouTube is definitely preferable, but at least we have a local copy.

9 thoughts on “Suppressing the Video of Dissent”