Remember the recent post on the castrated Swedish lion?

Well, the wymin are at again. The first time they got their way by going to the EU court:

The armed forces agreed to emasculate the lion after a group of women from the rapid reaction force lodged a complaint to the European Court of Justice, Göteborgs-Posten reports.

Now they’ve got something else in their sights – road signs: 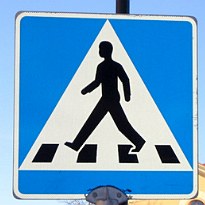 A local authority which wants to erect road signs featuring female characters in the interests of gender equality has had its initiative vetoed by national authorities.

Hässleholm Municipality designed a new sign to mark pedestrian crossings on roads in the town. Instead of the traditional male figure – known in Sweden as Herr Gårman, which translates as both ‘Mr walk man’ and ‘This is where you walk’ – council roads chief Anders Servin designed a ‘Fru Gårman’. 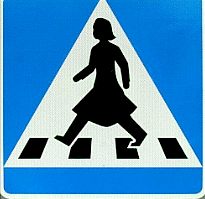 “Equality is important,” he said.

“This has also been fun for Hässleholm, as we are first in the country.”

But the project has now been vetoed by the Swedish National Roads Administration (Vägverket). It points to laws that state that a new road sign may not erected if it could be confused with an existing design.

“For us to consider the case we would need to believe it could succeed, and the government has so far not been positive. We have already received a number of requests for ‘Fru Gårman’ signs,” said Chester Bernsten at the administration.

They’re right, “equality is important.” But what fool would think that a road sign represents anything egalitarian? Are these wymin brain-washed or what?
– – – – – – – – –
Sometimes you read the news and think you’ve wandered accidentally into some schoolyard squabble. A lot of little girls and boys making faces and each claiming the others have cooties. I don’t know how many times I’ve heard men demeaned as being “little boys.” But if that is the case, then these wymin are nothing more than little girls demanding their turn on the merry-go-round. 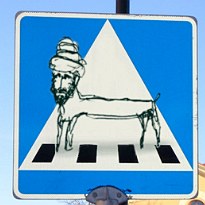 Just because the state turned these ninnies down doesn’t mean the fight is over. Guess who will be running to the European Court of Justice whining, “Teacher, teacher, it’s not fair…” And the Court, castrated and correct, will side with the girls. State sovereignty is over, folks. Dead and buried by the Lisbon Traitors Treaty.

The feminists have once again wasted their talents on trivia. In fact, the whole movement has gone to the dogs.

Update: Thanks to Steen, we now have a better version of Fru Gårman.

11 thoughts on “Signs of the New World Order”