Update: The third link to the photos has been corrected. Sorry for the error. 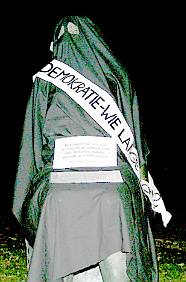 Back in September I wrote about the Anonymous Group of Democratic and Free Thinking, an anti-jihad action organization in Germany.

The group has struck again, veiling statues and sculptures in an overnight operation to draw attention to the consequences facing Europe if Islamization is not reversed. Photos of the results are here.

This time the Anonymous Group of Democratic and Free Thinking extended their operation to cover all the German-speaking areas of Europe. Below is their press release, which was emailed to Gates of Vienna early this morning.

Democracy — how long will it remain?

On 27 November 2007, we continued our precious campaign of veiling statues to inform the public about the threat of Islamisation to our democratic and liberal values. With this repeated action in the cities of Zurich, Innsbruck, Vienna, Cologne, Berlin, Heidelberg, Wuppertal, Munich, Osnabrück, and Mönchengladbach, we expanded to Germany, Austria, and Switzerland.

The aim of this campaign is to point out that creeping Islamisation endangers the European idea of UNITY IN VARIETY in Germany, Austria and Switzerland and, in the long run, also the liberal core values and democracy of entire social and political Europe.

With the veiling of public sculptures, our goal is to draw public attention to the fact that democratic and liberal as well as secular thinking is the most precious value that is to be advocated for and to be protected. We want to show that the public discussion concerning Islam is influenced mainly by one-sided claims for integration, particularly by the so called one-sided demand for tolerance by European societies towards Muslim communities. In our understanding, tolerance and integration have to be carried out by both sides. Everywhere, muslim groups and societies dismiss any serious or credible attempt to prove any kind of tolerance towards “non-believers”.

On the one hand, the granted privileges for those religious-political oriented minorities haven’t lead to any integration success. On the other hand, the European societies seem to lack any willingness to stand up for their values such as liberal thinking, women’s rights or attitudes of solidarity. These processes are leading to strained relations towards parallel societies.

QURAN, Sura 8, Verse 39:
And fight them on till there remains not any mischief and the entire religion be only of Allah.

As long as violence is both a basic tenet in the Quran and an expressed intent of the Islam-ideology, Islam itself cannot be considered as being a religion or an acceptable part of the content frame of Article 4 of the German constitution, of Article 14 of the Austrian constitution and of Article 15 of the Swiss constitution. Our European constitutions do not permit any political or religious movements that refer to force or violence, and no exception is stated for movements that claim exemption because they call themselves a religion.

For example, the Quran imperatives of Sura 8, Verse 39 contradict the German, Austrian and Swiss constitutions, all of which refer to religious freedom and liberal views regarding professions of faiths and beliefs:

Our democracy is NOT a God-given good. It is the opposite — for centuries, it has been obtained only through willful and committed efforts. In the religious as well as politically motivated Islam-ideology, we see a threat to European democracy itself. If we all do not advocate for European values and for liberal thinking — to which our societies again and again refer in a very conscious way — our democratic and peaceful Europe will be a phase-out model soon.

11 thoughts on “Veiled Statues From Munich to Vienna”