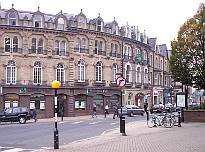 I feel compelled to post about this news story because it takes place in my other home town. Harrogate is a spa town in lower Nidderdale, in the West Riding of Yorkshire, and it is where I spent the halcyon days of my youth.

From the Sunday Sun:

North show gets to grips with Islam

It is known more for its cream teas than calls to prayer, but the spa town of Harrogate is the setting of a new reality show in which people are persuaded to live under Islamic conditions. Will the programme aid religious cohesion or create division?

A controversial reality TV show to be broadcast next month aims to challenge preconceptions about Muslims.

But the programme, which sees non-Muslims living under strict Sharia law for three weeks, could also reinforce some people’s intolerance towards Islam.

One participant accused Imams featured in the three-part series of being prejudiced towards her and said she experienced “animosity” from them.

Another, however, was surprised by the “confrontational” and “aggressive attitude” British people had towards her as a result of her temporary conversion to a Muslim way of life.

Film maker Narinder Minhas chose the affluent market town of Harrogate in North Yorkshire for his bold experiment… a place that is home to just 311 Muslims in a population of 60,000.

His guinea pigs include a mixed race couple, a gay hairdresser, an atheist taxi driver and a glamour model… all of whom are called upon to give up unmarried sex, alcohol and pork, pray regularly and dress modestly for three weeks.

Minhas, the man behind reality shows Priest Idol and Indian Finishing School, wanted to make the documentary after tiring of too many “po-faced” programmes about Islam.

He said: “I wanted to make a series that had some humour in it. I’m tired of seeing guys with beards who are a bit scary. I wanted to explore how white people come to grips with a religion they’ve kind of heard of. I wanted to portray those people as human beings who go through a range of emotions.”

However, one of the show’s participants, Carla Newbury-Jones, had mixed feelings about it… and found little to laugh about.

The property entrepreneur’s partner, Muslim Ashley Ashiq, proposed to her during filming.

But Carla, 34, said she found the Imams’ strong disapproval of their relationship very disturbing. She believes they were prejudiced towards her because she is Christian and white.

She revealed: “It was a really uncomfortable experience and I was so glad when it was over.

“I felt they looked down at me because I was white and not a Muslim. We have a beautiful relationship and refuse to let other people’s biased attitudes get in the way.

I fully expect the Law of Unintended Consequences to work itself out in this little media gem.

5 thoughts on “Sheikh for a Day”