There’ll be no ho, ho, ho this Christmas. Aspiring Santas have been told not to use the term “ho” because it could be seen as derogatory to women. 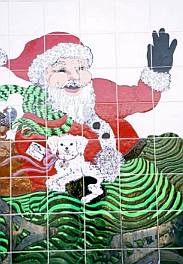 A Santa veteran of 11 years who attended the course told the Sunday Mail the trainer was very clear in spelling out no to “ho”.

The term “ho” is also American slang for a prostitute. “We were told it (ho) was a derogatory term for females and can upset people,” said the Santa, who did not want to be identified publicly.

“As far as I’m concerned, a hoe is something you dig the ground with…

Critics have branded the instruction for Santas to use “Ha! ha! ha! Merry Christmas” as nonsense and madness.

“Can we use a garden hoe anymore? Do we have to remove that?” she said.

“Ho, ho, ho from Santa is going to be everywhere. It’s going to be in books, on Christmas cards and kids are going to come across it sooner or later.

“You could say that ‘ha, ha, ha’ was dangerous because it was always tied to the villains in movies and horror films.”

“There is nothing wrong with ‘ho ho ho’,” he said.

“That term has been used for many years and it hasn’t seemed to have done any harm at all.”

Heh. That’s what you think, Mr. Hood. “Ho” is just too sexy for a fat old man to be saying to little children.

And too many “ha ha ha’s” will get you a trip to detox.

“He he he”? Just wait till the feminists get hold of that one.

Saint Nicholas (how’s that name for an in-your-face Christmas?) needs to lose about half his body weight. The belly alone will ruin his heart if he walks two steps. No wonder he’s always sitting down.

And then, slim and trim and having had a “hohohoectomy”, he needs to attend re-education camp where he can learn the terrible truths about global warming. Then when Christmas — uh, Solstice Holidays — comes around, he can make sure the kids are up to date on the latest scare stories about global warming.

7 thoughts on “Saint Nicholas Gets a Hohohoectomy”