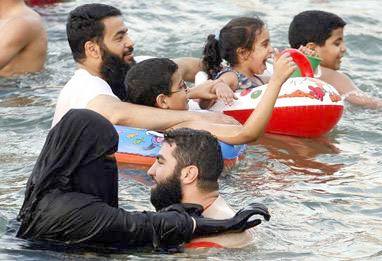 This is such a sad picture. All the kids splashing and obviously having a good time.

Meanwhile, anchored by her heavy, wet abaya, this young woman is forced to hold on or sink. Maybe it’s only neck-deep?

“Well, at least she lowers her chances of skin cancer,” Pollyanna said sunnily.

Thanks to The Bellicose Augur for this picture.

13 thoughts on “The Water is Lovely, Momma. Wish You Were Here”