For the last week or so Fjordman has done heroic service in the comments at Little Green Footballs, arguing the case for Vlaams Belang and Sverigedemokraterna when almost anyone else who disagreed with LGF’s host was banned from the site.

We all owe Fjordman a debt of gratitude for his efforts on behalf of the Counterjihad.

As most readers know by now, I have been involved in what has unfortunately become a very public brawl — some would probably say witch-hunt — with Charles Johnson of major American blog Little Green Footballs about the supposed “racism” of the Sweden Democrats and the Vlaams Belang. Many of these claims have already been countered, though LGF refuses to link to this. I have announced my intention to take a break from commenting at LGF, where I have been active for several years, since it has become abundantly clear that neither Charles nor many of his readers have any interest whatsoever in having an actual debate, and certainly not about the real threats to freedom in Europe.

However, I’d like to continue the debate about “racism,” which now frequently means something along the lines of “I’m a Multiculturalist. I’ve just lost the debate because I have poor arguments in favor of my case. I want to shut you up, therefore you are a racist.”

An American friend of mine once suggested the creation of an European Indigenous People’s Party. When seeing the speed of the demographic shift that is taking place and the censorship imposed on any debate of the issue, maybe this will actually happen. There is no other continent where the indigenous peoples are being systematically stripped of their heritage, displaced in their own cities and are subject to violence and abuse with the active participation of their own authorities, yet where this is celebrated as a victory for tolerance and where the natives are banned from even verbally opposing any of this. Yes, I think this reveals an anti-European bias. 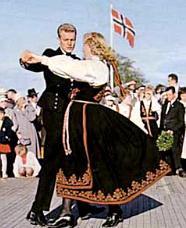 I asked Charles Johnson about this: “OK Charles, since you make this to be about racism, I’d like to hear your definition of racism. The indigenous population of all European countries is white. If European countries would like to maintain the indigenous population as the majority, this by extension means a white majority. Do you think the people in, say, Norway, have the right to desire an immigration policy which ensures a traditional demographic majority, or is this racism? If so, how come non-European countries are allowed to desire the same thing without being attacked? Since you’re so preoccupied with racism, will you also launch an equally passionate campaign against the Whiteness Studies now taught in increasing numbers of American educational institutions, sometimes with the support of public money?” He first claimed that the question was “meaningless,” but after I pushed him, he reluctantly replied that yes, Europeans have the right to resist being turned into a minority in their own countries. Good. He didn’t answer me regarding the issue of Whiteness Studies, though. I kept pushing him, and he finally replied: “Since you’ve repeated this several times, I’ll answer it. The fact that I do or do not post about one thing has absolutely nothing to do with what I post about something else. That is a complete red herring, and you know it.”

I’m not so sure it is. The blogger Vanishing American notes that some university courses now present whites as more or less genetically evil: It’s everywhere.
– – – – – – – – –

How can purges against ‘racists’ on these blogs and forums be instituted, if everybody of European descent is racist? If racism disqualifies you from the right to free speech, and if all Europeans are racists, then no European-descended person has a right to freedom of expression. Ban us all. We’d even have to ban ourselves. Just give up and turn ourselves in for re-education.

A mandatory University of Delaware program requires residence hall students to acknowledge that “all whites are racist” and offers them “treatment” for any incorrect attitudes regarding class, gender, religion, culture or sexuality they might hold upon entering the school, according to a civil rights group. The organization cited excerpts from the university’s Office of Residence Life Diversity Education Training documents, including the statement:

A racist is one who is both privileged and socialized on the basis of race by a white supremacist (racist) system. ‘The term applies to all white people (i.e., people of European descent) living in the United States, regardless of class, gender, religion, culture or sexuality. By this definition, people of color cannot be racists, because as peoples within the U.S. system, they do not have the power to back up their prejudices, hostilities, or acts of discriminationï¿½.’” The education program also notes that “reverse racism” is “a term created and used by white people to deny their white privilege.” And “a non-racist” is called “a non-term,” because, the program explains, “The term was created by whites to deny responsibility for systemic racism, to maintain an aura of innocence in the face of racial oppression, and to shift the responsibility for that oppression from whites to people of color (called ‘blaming the victim’).

I have written about the subject of anti-white racism before: 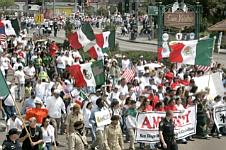 Barbara Kay of Canada’s National Post writes about a new fad called Whiteness Studies: “The goal of WS is to entrench permanent race consciousness in everyone — eternal victimhood for nonwhites, eternal guilt for whites — and was most famously framed by WS chief guru, Noel Ignatiev, former professor at Harvard University, now teaching at the Massachusetts College of Art: “The key to solving the social problems of our age is to abolish the white race.”

Some of the inventors of Whiteness Studies have stated their goals quite openly: “Abolitionism is also a strategy: its aim is not racial harmony but class war. By attacking whiteness, the abolitionists seek to undermine the main pillar of capitalist rule in this country.” And: “The task is to gather together a minority determined to make it impossible for anyone to be white.”

College professor Mike S. Adams writes about conspiracy theories he’s heard among students attempting to blame various social ills on white people: “The Mona Lisa was painted by an African artist and stolen from a museum in Ethiopia. Most of the great works of art are African in origin and stolen by white people. This is done to promote the myth of white cultural superiority.” Another one: “It is a proven fact that U.S. Coast Guard ships — on orders from President Bush — were seen crashing into the New Orleans levees during Hurricane Katrina. Bush did it to kill black people living in government housing projects.”

Adams presents this as funny, but I don’t think it is.

It is a disturbing testimony to the fact that hating whites, still the majority in the USA, is OK, indeed encouraged, in American colleges. In the book Religion of Peace?: Why Christianity Is and Islam Isn’t , Robert Spencer quotes “Rachel,” a white American student, who spoke these words to American Indian professor Dr. David Yeagley in 2001: “Look, Dr. Yeagley, I don’t see anything about my culture to be proud of. It’s all nothing. My race is just nothing…. Look at your culture. Look at American Indian tradition. Now I think that’s really great. You have something to be proud of. My culture is nothing.”

As Yeagley observed, “The Cheyenne people have a saying: A nation is never conquered until the hearts of its women are on the ground… When Rachel denounced her people, she did it with the serene self-confidence of a High Priestess reciting a liturgy. She said it without fear of criticism or censure. And she received none. The other students listened in silence, their eyes moving timidly back and forth between me and Rachel, as if unsure which of us constituted a higher authority… Who had conquered Rachel’s people? What had led her to disrespect them? Why did she behave like a woman of a defeated tribe?”

Well, my answer to that would be: Americans have been bombarded with accusations of racism, almost exclusively against the European-derived majority, for decades. If I may be so bold as to say so, that’s what I really see when I look at the hysterical overreaction on part of Little Green Footballs regarding “white racism” in Europe, despite the fact that people of European descent are probably among the least racist people on the planet right now.

LGFers base their world-view on the existence of a moderate Islam, which doesn’t exist, and on the existence of a large and rabid network of neo-Nazis in Europe, which also doesn’t exist. Neo-Nazi groups are generally quite marginal, for the very simple reason that people don’t like them. I agree that they should be watched, but they are far down the list of enemies of freedom right now, behind Muslims, Leftists and the European Union. The only theoretical reason why even a fraction of Europeans would embrace real extremist groups would be if they have their backs against the wall and everybody else has abandoned them, which is exactly what we’re trying to avoid. 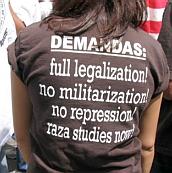 Moreover, why do American politicians across the board, including Republicans and senior members of the Bush administration, cooperate with La Raza, meaning “the race,” a Mexican group Charles Johnson himself calls a Hispanic supremacist group? Why is this considered OK, while native Europeans who simply don’t want to become a minority in their own countries are demons? Meanwhile, Mexican and Hispanic gangs are deliberately cleansing black, white and Asian Americans from their neighborhoods in Los Angeles and elsewhere. I called this “ethnic cleansing” once at LGF and was denounced as “hysterical.” Johnson doesn’t write too much about that, but some of his readers apparently believe there is a Nazi hiding behind every stone in Europe and reveal this if there is even a hint of resistance to the ongoing Muslim colonization of the continent, aided and abetted by the European Union.

I believe this tells us more about the anti-white intellectual climate in the United States than it does about Europe. This brings us to a question I have asked before. Many Americans say they are tired and will never become involved in Europe again. Fine, I can understand why. But another question is, if native Europeans actually start fighting back against Islamization for real, whose side will Americans be on? Will they be on ours, or will they back the poor, Muslims victims of European racism and xenophobia, just like they did in Yugoslavia?

Judging from the aggressive hostility towards anything European they are indoctrinated with, I fear the latter.