One of the advantages of writing an occasional historical rumination is that I receive emails from interested readers who also pursue history as their avocation. Often they supply me with links to new information and tidbits of lore, while pointing me to historical topics that I have neglected.

And so it was after my weekend essay about the Civil War. Last night I received this email from a reader in Canada:

I quite enjoyed your post, particularly those elements that involved your personal history and the histories of those in the comments section. They serve to bring not just one’s own history to life but aids those unfamiliar with the events in coming to better understand the historical events of others. The insights we gain through this sharing in turn serve us all when we seek to understand the events unfolding in the present. I fear that although this may seem self-evident to you and me, much of present discourse suggests otherwise.

Nevertheless, I wish you to know that having read your post and the comments that followed, I have learned things of which I was not aware, and can apply in future instances where knowing of them will aid me in putting into context elements of American history I am exposed to in future. Thank you.

In this regard, I feel I should reciprocate in some way, and as the Civil War is to you personal, I hope that I may provide you with an aspect of the war that if it is new to you, will have that element of exploration and discovery that new directions in history can provide.

Just as I rarely see any mention of the over forty thousand Canadians who volunteered and fought in Vietnam between 1959 and 1975, I believe it little known (I would appreciate being corrected in this regard) that thousands of Canadians fought on both sides of the American Civil War and that Canada served as a refuge for many working for the ultimate victory of the South while still others, whose view of the South would be considered diametrically opposed, found sanctuary after fleeing from the South. Its simultaneous many-sided role within its boundaries and within the armies of both the Union and Confederacy makes for interesting history for us both.

Several Highland Regiments, such as the Nova Scotia Highlanders, pipers and all, marched across the line and signed up en masse.

If your curiosity is piqued… 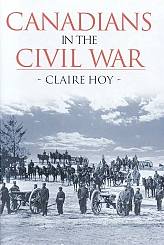 …may I recommend the book and website by author Claire Hoy (Cdn.), Canadians in the Civil War as its one I have read. I believe he has a website related to the book that may allow you to explore further before deciding whether to obtain it.

It is, of course, an outsider’s perspective of events central to the core of America’s understanding of itself and while I read it several years ago, I can think of nothing that would serve to offend. You may disagree with points, but I recollect no malice in its treatment.

I would hope it may provide you with an enjoyable distraction from both recent and current events of the day-to-day.

I had read of Canadians who volunteered on one side or the other in the U.S. Civil War, but I had no idea that there were so many.

I tracked down the Amazon site for the book without any problem, but I wasn’t able to find Claire Hoy’s website. However, I did find the following brief review in an issue of Maclean’s from a couple of years ago:

The tangled common history of Canada and the United States was never more so than during the American Civil War, which lasted from 1861 to 1865. In Canadians in the Civil War, journalist Claire Hoy offers a fine historical survey of its effects on Canada. More than 30,000 Canadians fought in the war, mostly for the North, enticed by $200 enlistment bonuses or shanghaied by American recruiters who didn’t shy at kidnapping. Some 5,000 died. U.S. draft dodgers — known as skedaddlers — fled northward, a century before Vietnam. The North’s blockade of Atlantic ports and Confederate refugees — Montreal’s St. Lawrence Hall hotel housed so many that its menu featured mint juleps — made for rising cross-border tension. The fear that victorious Union forces might march northwards was a key to bringing about Confederation in 1867.

This is fascinating material. There seem to be only a few copies of the book listed as available on Amazon, so maybe if enough Gates of Vienna readers click through and try to buy it, it will go into a second printing…

History is full of surprises.

3 thoughts on “Canadian Blue and Gray”