The Muslim demonstration in Karlskrona went off today as scheduled. The protesters were objecting to the publication of Lars Vilks’ depiction of Mohammed as a Rondellhund. 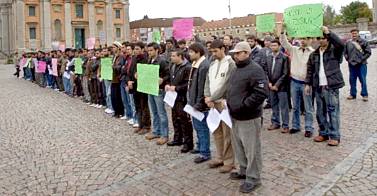 Our Swedish correspondent Carpenter has translated an article on the demo from this afternoon’s Blekinge Läns Tidning:

250 Muslim students gathered today at Stortorget, Karlskrona. They demanded that the Swedish media tighten the ethical rules for the press, and that the ombudsman of the press take note of the demonstration.

Today at twelve o’clock, 250 Muslim students of Blekinge Tekniska Högskola [college in Karlskrona] gathered at Stortorget, Karlskrona. They demonstrated against the publication of Mohammed depicted as a roundabout dog by the artist Lars Vilks.

The protest was silent, but the message of the demonstrators’ placards was unambiguous: the freedom of expression shouldn’t be at the expense of the religious faith of other people.

“We demand clearer ethical rules for the press, radio and television in Sweden. We also think that the ombudsman of the press should take a close look at the publication,” says Junaid Naseem, responsible for the demonstration.

4 thoughts on “Muslims in Karlskrona Protest the Modoggies”