Over the weekend I posted about Eric Brandt, the Swede who nominated Adolf Hitler for the Nobel Peace Prize in 1939. The next day, our Swedish correspondent LN brought to my attention the fact that Mr. Brandt had actually nominated Der Führer as a hoax, to protest of the nomination of Prime Minister Neville Chamberlain, the master of appeasement, for the same prize.

LN left us with some Swedish materials in need of translation, and Paul, who blogs at Swenglish Rantings, stepped forward to take on the task. He drew on Bengt Nilsson’s website for his material, and has translated an introductory paragraph, followed by Eric Brandt’s letter to the Nobel committee.

According to Mr. Nilsson:

The man behind the nomination was of course Erik Brandt. Exactly what drove him I do not know, but judging by his engagement during the following years he was a burning Anti-Nazi who in all ways wanted to make people aware of what went on down in Germany. The nomination of Chamberlain, Brandt felt was a completely heedless act and he decided to make “a demonstrative protest” which at the same time would be a democratic mockery of Hitler. No sooner said than done, Eric Brandt formulated a letter of nomination that looked like this:

To the Norwegian Parliament’s Nobel committee. 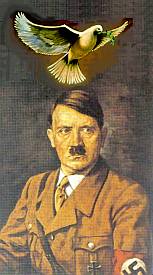 The undersigned hereby allows himself to respectfully suggest that the Nobel Peace Prize for 1939 be awarded to Germany’s Reich Chancellor and Führer Adolf Hitler, whom, according to the opinion of millions of people, more than any other man in the entire world is deserving of this prestigious award.

It has been authentically documented that the world peace was in great danger in 1938, and it was only hours before the breakout of a Great European War. The individual who in this dangerous situation saved our continent from the horrible disaster was without a doubt first and foremost the German people’s great leader, whom at the crucial moment voluntarily refrained from letting the mine explode, even though he had the power to release world war.

By his glowing love of peace, as previously documented best in his famous book Mein Kampf — perhaps only second to the bible, the finest and most widely distributed book — and his extraordinary deed of using only peaceful means, without bloodshed, to incorporate Austria with Germany, Adolf Hitler was induced at the above mentioned critical time to withhold from violence during the liberation of his homesick countrymen in Sudetenland, and in his legitimate quest to make his fatherland great and powerful. It is very likely that Hitler, when left undisturbed in peace by the existing warmongers, will be able to follow through with his high purpose, and within a reasonable time will pacify Europe and perhaps the entire world.

There are, however, an unfortunately large number of people who fail to see the magnitude of Hitler’s peace efforts, and I would out of consideration for this fact not have found the time to be right to bring forward Hitler as a candidate for the Nobel Peace Prize, unless a number of members of the Swedish Parliament had suggested another candidate, namely the English Prime Minister Neville Chamberlain. Such a suggestion seems hardly thought through. Surely, it is true, that Chamberlain by his extraordinary consideration and understanding of Hitler’s peace efforts to a high degree has contributed to maintaining world peace, but the final decision was, however, with Hitler and not with Chamberlain! It is Adolf Hitler and no other whom we foremost have to thank for the fact that we still have peace in the major part of Europe, and we also tie the hopes of future peace to him.

Due to Chamberlain’s indisputable merits in working for peace, it would possibly be called for that a smaller part of the peace prize was awarded to him, but the proper thing would be, that no name should stand beside Adolf Hitler’s and cast a shadow upon it. Adolf Hitler is after all our time’s incomparable divinely gifted freedom fighter, and millions of people look up to him as if he were the Prince of Peace on earth.

For understated sarcasm, this letter is unmatched. Even so, it’s amazing that so many people and newspapers were taken in.

As a Swede with the talent for deadpan mockery, Lars Vilks is Eric Brandt’s legitimate heir. Let’s hope the Modoggies have more success against the evil juggernaut of history than Mr. Brandt’s letter had against “peace in our time”.

One thought on “Protesting the Nobel Appeasement Prize”