I’m a bit behind on the scandal scene. But finally having been released from that clumsy sling and no longer taking pain medication (much), I’m ready to roll.

For many of you, this is old by now. Ho-hum, move to the next story. But in the midst of my injury, operation, and slow recovery I lost track of Scott Thomas past the initial brouhaha about his fraudulent stories. Today I spent some time looking around for the follow-up and finale to the story of the soldier/journalist.

What a naughty boy he turned out to be. And his former magazine’s publisher seems to have been reduced to catatonia. At least I haven’t been able to find any place where Mr. Foer apologizes for being taken in by this fraud.

Background for those of you who weren’t paying attention/never cared: 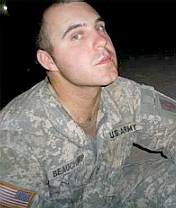 The right side of the US blogosphere stormed the accuracy of an anonymous reporter “Scott Thomas” at The New Republic. They looked closely at what he had written and decided this soldier/journalist had fabricated some tales about the atrocities of American soldiers in Iraq — tales which TNR, famous for its fact-checking, proceeded to publish. Why? Because they want this war over and this anonymous soldier gave them fuel for their righteous fire.

Here’s what I wrote at the time:

The dust-up concerns a series of essays The New Republic published by a supposed soldier in Iraq who describes anecdotes about his fellow soldiers that are (a) horrific and disgusting, and (b) inaccurate in their details. Of course, (b) simply means another “fake-but-accurate” strand in the MSM tapestry of careless lies and half-truths woven to serve their purposes.

Since then, Scott Thomas has morphed into Scott Thomas Beauchamp. And surprise! His wife, Elspeth Reeve, worked for The New Republic also…as a fact-checker, no less. What no one can figure out is whether or not she was ever assigned to check her husband’s stories.

Well, both of these “journalists” are gone from TNR. Confederate Yankee calls the wife’s leave-taking “Another Beauchamp-Related Vacancy,” though it’s not the only one he mentions. There is also the assistant to the publisher, who aired TNR‘s family secrets by relating publicly the details of a conversation that transpired between him and his boss regarding the Scottgate mess. In no time the assistant, Mr. McGee, became history too, alongside Beauchamp and Reeve.

Richard Miniter, of Pajamas Media, who has been to Iraq a number of times since 2003, took on the job of ferreting out the nuggets of real information in this sordid mess:
– – – – – – – – –
For one thing, Miniter noted that the whistle-blower, McGee, has been vilified by the left blogosphere for…being gay. This seems to imply that he can’t be trusted, or that he’s a closet conservative. After Mr. Miniter interviewed him, TNR served McGee with a cease-and-desist order. No more talking about the case of Beauchamp.

Here’s another tidbit: It seems Mr. Beauchamp married Elspeth Reeve in a hurry, even though he was at the time engaged to someone else — in fact, he was engaged three times before marrying the fact-checker at TNR. Speculation: was it her job at TNR that made her so alluring? His former fiancée, Priscilla, thinks so:

Priscilla believes that one of the reasons that Beauchamp was interested in Reeve (and ultimately married her) was her position at The New Republic.

Indeed, it appears that Beauchamp’s relationship with Reeve shifted into high gear around the time he was first published in the magazine. “He knew Elspeth from college, but they never were a couple. Then she started emailing him in February or so.” That was a few weeks after his first piece appeared in The New Republic. “I really think she supports him with his articles.”

Did Reeve’s job at The New Republic really make a difference? “Yeah, I think it was a plus point for her that she is a writer/journalist …”

It appears Beauchamp had little interest in Reeve until she was in a position to help him. “I knew he was engaged twice before he was with me, but not with Elspeth [his college friend and now wife]. … Last summer, we were together in my room and he told me about her and made fun of her.”

Beauchamp has a history of disappointing those around him. Beauchamp’s best friend in the Army (who now no longer speaks to him) was dating a local girl and he encouraged the budding young writer to meet her sister. That is how he met Priscilla.

Beauchamp’s parents believed that Priscilla was about to join their family. “His family came to Germany for his [Beauchamp’s’] R&R and they thought they would come to see me. He didn’t even tell his family that he wanted to break up with me.” He simply pretended that he still intended to marry Priscilla.

Then, he suddenly switched. “I waited over 8 months, faithfully, and he just came to my hometown for a day. He said he is not ready for marriage yet but he still loves me! …. Well, after Germany, he went to France for a week and then to the States to marry her [Elspeth Reeve]. It was quite a surprise for his family.”

Beauchamp appears to repeating this behavior. Even though he has access to free phones on base to call the United States, he is not offering an explanation to the press-just as he didn’t offer one to Priscilla.

But that wasn’t the end of it. After Miniter’s research into the Scottgate affair, Pajamas Media published an interview by Confederate Yankee with the Investigating Officer in Iraq charged with finding out what had happened. As it turns out, not much — not unless you think that making sh** up is journalism (unfortunately, TNR staff have a history of doing just that).

The IO found Beauchamp to be a fabulist. In fact, it took the journalist two attempts to sign an affidavit admitting he made it all up. I guess the Army let him slide on the first go-’round:

– Private Scott Beauchamp did not reveal that he was “Scott Thomas,” author of “Shock Troops,” until he was asked to sign a second sworn statement. It was after he signed this statement that his identity was revealed in The New Republic.

– Major Cross has seen no evidence of any sort of fact checking by The New Republic’s editors prior to publication, a sentiment shared by Army Public Affairs Officers in both Iraq and Kuwait. It is also worth noting that TNR editors have refused to publish PAO statements that contradict their claims.

– Major Cross was unable to find anyone in Beauchamp’s squad, platoon, or company that would corroborate the stories he told in “Shock Troops.”

– Beauchamp was the subject of a second investigation, which found him guilty of violating his unit’s operational security for which he could have been thrown out of the Army [he had a blog in which he published information about his squad’s movements -D].

The U.S. Army and the soldiers in Beauchamp’s unit seem to have been very forgiving of his fraudulent stories and potentially dangerous operational security violations.

NOTE: Confederate Yankee provided an amendment to his original interview with Major Cross, the IO in Iraq. It concerns the second affidavit signed by Beauchamp:

Correction: The article originally said Beauchamp had signed a sworn statement that recanted the accounts in his three pseudonymous articles for The New Republic. He did not recant, but did not stand by his claims.[my emphasis]

If that doesn’t leave you scratching your head in puzzlement, you’ve been hanging around with too many lawyers.

As I said, lots of you are probably up to date on this. I’m still playing catch up since my injury in June. If you know of any interview the publisher of The New Republic has given since Beauchamp was investigated by the Army, please let me know.

Meanwhile, if you google the words The New Republic, you’ll find it on sale for seventy-five percent off. For our European readers — the ones who have gotten this far — believe me when I say that TNR was once in the top tier of left-centrist news magazines. It was Al Gore’s exclusive territory for many years. Perhaps his failure to get elected caused this newest fall from grace rational thinking. It’s an old, once venerable mag, but somehow I don’t think it’s going to survive this third crisis of reliability.

Who knows, though? Perhaps like The New York Times it will simply step over the trail of its own smelly emanations and sail blithely on.

Being on the Left means you never have to apologize.