UPDATE (by Dymphna): Bacon’s Rebellion is carrying this story also. I guess when the Ummah arrives he’ll have to change his name real quick.

Virginians who live in the rest of the state look askance at Northern Virginia, and with good reason: the sprawling suburbs of D.C. are like a piece of Yankeeland dropped into the bosom of our sovereign Commonwealth. I voluntarily exiled myself from NoVa thirty years ago, and whenever I have cause to return, I stand with my son atop Arlington Ridge, sweep my hand in the direction of Pentagon City and Alexandria, and warn him: “You will never find a more wretched hive of scum and villainy.”

Unfortunately, we all have to pay attention to Northern Virginia, because that’s where the people are, and that’s where the money is. The state Senate keeps the old ways of the Commonwealth from being swamped completely, but NoVa pays the piper in Richmond, and it still gets to call much of the tune.

And so it is with the Virginia Commission on Immigration. It was just recently created, with members appointed by Governor Tim Kaine, but it is already doing the bidding of the unholy alliance between the open borders business lobby and the Muslim Brotherhood.

Jihad Watch broke the story of the appointment of Dr. Esam S. Omeish to the commission, and that was what made the big splash yesterday — the chairman of a Muslim Brotherhood-affiliated organization took his place on the panel.

A local delegate has asked Democratic Gov. Timothy M. Kaine to re-think his appointment of the head of the Virginia-based Muslim American Society to the Virginia Commission on Immigration. 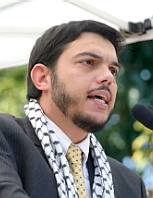 Del. Todd Gilbert, R-Woodstock, wrote to Kaine earlier today, saying he was concerned about the appointment of Dr. Esam S. Omeish, a Northern Virginia physician and the group’s president, to the panel. The commission was created earlier this year to study the impact of illegal immigration on the commonwealth.

The Muslim American Society has significant ties to the Muslim Brotherhood, a group founded in Egypt, Gilbert said.

“It is unfortunate that the Governor would choose the leader of an organization such as this to represent many the freedom-loving Muslim citizens of Virginia on this important commission,” Gilbert said.

“While the Muslim American Society claims to be the innocent face of peaceful Islam in America, their history and teachings tell a much different story. Unfortunately, it is a story about which all Americans have become much too familiar — that of the promotion of a global Islamic state. The questionable origin and teachings of this group should give the Governor some serious concerns about his recent appointment. Even though this organization has a savvy public relations machine, the public face that it projects may disguise some very troubling hidden intentions.”

Gilbert asked Kaine to “take the necessary steps to ensure that the important work of the Commission is not tainted by other, more nefarious agendas.”

Here’s a video of Dr. Omeish voicing his opinions about the state of Israel:

But Dr. Omeish, of course, denies that there is any longer such a thing as the Muslim Brotherhood. During the media circus surrounding the Holy Land Foundation terrorism finance trial, he had this to say:
– – – – – – – – –

Esam Omeish, president of the Virginia-based Muslim American Society, or MAS, says the documents introduced in the Holy Land trial are full of “abhorrent statements and are in direct conflict of the very principles of our Islam.”

“The Muslim community in America wishes to contribute positively to the continued success and greatness of our civilization,” Dr. Omeish said. “The ethics of tolerance and inclusion are the very tenets that MAS was based on from its inception.”

His group, formed in 1993, is thought by many to be the Brotherhood’s current incarnation in the U.S., although he and other MAS leaders say their group formed as an alternative to radicalism.

This reminds me of the old days of the Cold War, when the various lefty organizations denied any involvement with the Communist Party. They were always named something like the Workers’ Solidarity Federation or the International Brotherhood of Labor. “What Communist Party? We don’t see no communists around here.”

But the money, the propaganda, the strategy, and the marching orders always came from Moscow. After the fall of the U.S.S.R., when the Soviet archives were opened, ample documentation emerged showing how Soviet money and influence was laundered through various front organizations which all the while worked assiduously to destroy the institutions and culture of the West from within.

And so it is with the Muslim Brotherhood. Foundations, shell corporations, charities, and dummy organizations all shield the terror financiers and their petrodollars from any direct linkage with seditious activities. Federal and international agencies chart the complex but undeniable chains of influence, yet these make for tedious and technical reading. The cries of “racism” and “Islamophobia” ring much louder, and gain more compelling sound bites, than all the work of the green-eyeshades guys and the Arabic translators ever will.

The interesting thing is the convergence of interests that created the current crisis in the Virginia Commission on Immigration. This is essentially an intra-Republican squabble — Tim Kaine is a Democrat, but the recent power struggle within the commission pitted one faction of Republicans against another. The “open borders” faction won out over the “traditional Virginia values” faction, and by alliance with the Democrats the enthusiasts for unbridled immigration gained control of the commission.

According to Inside NoVA:

Tuesday’s 9 a.m. meeting got off to a strange start when it took more than 30 minutes for the commission to appoint a chairman and vice chairman.

That’s because Del. Bob Marshall, a staunch conservative who sponsored the bill to create the commission, repeatedly, and at times combatively, insisted that tradition dictated he be chairman.

But a movement against appointing him chairman appeared to be afoot behind the scenes, prompting Marshall, R-Prince William, to ask that the nomination process be delayed until his colleague, Del. Jay O’Brien, R-Fairfax, arrived. O’Brien didn’t show up until after 11 a.m. because he had another meeting.

Citizen member George Foresman, however, wasn’t too keen on waiting.

“With all due respect, all the other members made an effort to be here at 9 in the morning,” said Foresman, a Powhatan resident and former Under Secretary for National Protection and Programs at the Department of Homeland Security.

He then nominated Sen. John Watkins, R-Midlothian, to be chairman, describing the state senator as “a fair and reasonable individual.”

“I am the author of this bill,” he said, noting it was “a little bit surprising to me that somebody made a different nomination.”

“The effort will be suspect; the conclusion will be tainted because we decided to go outside the normal process,” he said.

Then Watkins, who runs a nursery and said in his introduction that he employs immigrants, gave his campaign speech, calling for “a balanced, even-handed approach to dealing with this issue.”

In the end, the commission selected Watkins, and the meeting continued with an interesting, if slightly dated, report on the “Acclimation of Virginia’s Foreign Born Population.”

Notice all the “R”s after people’s names in the above quotes. We don’t have to wait for the Democrats to sell us down the river; the Republicans are busy doing it for them.

Owners of certain types of businesses — like Watkins, who runs a nursery — have a vested interest in an increasing supply of cheap Mexican labor. The Islamist organizations have their own agenda, and the Multicultural cover story is handy for both groups — hence the unholy alliance.

Many towns are up in arms against the Governor’s sanctuary-type immigration policies. The wrangling over the chairman of the commission is chronicled by Black Velvet Bruce Li, and there’s more background on the internal political hardball on the Washington Post blog.

The struggle over the chairmanship was fierce, and according to a Washington Post article, Mr. Marshall did not give up easily — his opponents had to wrestle the gavel from him.

The money involved in this issue, whether from business or Wahhabist petrodollars, is overwhelming, and has tipped the scales against ordinary people, guaranteeing that their preferences will have no effect on state immigration policy.

It’s becoming clear that the Muslim Brotherhood has penetrated deeply and at all levels of government within the United States.

Laura Ingraham has posted an audio interview (mp3 format) with Dr. Omeish, in which he admits to wanting Shari’a as the law for the U.S.A., if it can be voted in, and that he will work towards that end.

Keep an eye on the Vigilant Freedom blog later today. Christine has been all over this issue, and we can expect to see more on the topic at CVF as the day wears on.

Yesterday was not a good day for the Counterjihad, what with Italian police promoting cultural understanding by teaching their officers Arabic, Norway sending millions to support radical madrassas in Pakistan, Sweden paying illegal immigrants to go home, and a supporter of violent jihad running for municipal office in Finland.

And now we have the Muslim Brotherhood helping to guide Virginia’s immigration policy.

All this eager embrace of dhimmitude is enough to make a grown man cry.

It’s not just that the fox is guarding the henhouse: the hens voted him into the position. They enthusiastically welcomed him.

And now they line themselves up in neatly ordered rows to make it easier for him to pick off the plumpest and juiciest ones.

14 thoughts on “The Muslim Brotherhood in the Old Dominion”