As I reported yesterday, Tintin is a racist, or at least the book Tintin in the Congo is a racist book.

In Sweden a complaint of hets mot folkgrupp — agitation against an ethnic group — was filed against the publishers of a new edition of the book. Now it’s reported that the Attorney General has declined to take up the case. 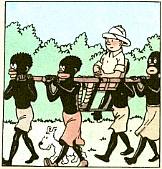 Judicial authorities in Sweden have rejected an attempt by a Swede of Congolese origin to slap a ban on “Tintin in the Congo” on racist grounds, the plaintiff said on Thursday.

Jean-Dadou Monya, 42, had lodged a legal action against Bonnier Carlsen, publisher of the Swedish translation of the Herge comic book, demanding that it be pulled from bookshops and libraries.

Monya said that prosecutors had written to him to say they had decided not to pursue the case for procedural reasons — notably because the timeframe for lodging such an action had been exceeded.

“I had expected that,” he said. “For me, the important thing was to draw attention to the racist character of this comic book which no long has a place in 21st century society.”

“This book is aimed at children and it is not good that they read racist things, such as when Tintin screams at Africans and treats them as lazy.”

Earlier in 2007, a Congolese student in Belgium initiated legal action to have it banned from sale there, while Borders bookstores in Britain is selling it as an adult graphic novel after yanking it from its children’s sections.

I won’t get into the merits of the case against Hergé on the basis of his alleged racism. Everybody involved in this nonsense is guilty of “presentism”, the persistent prejudice against people from our cultural past.

So we know better than they do, eh? We’ve become wise and morally superior, and have outgrown all the childish notions entertained by our ancestors, haven’t we?

I’m having none of it. The past is a foreign country; they do things differently there.

I’ve got an idea: let’s just simply ban the past.

It worked for the Soviet Union, didn’t it?