The month of July in the Counterjihad Calendar is represented by The United States of America.

Here in the U.S.A. we are not as Islamized as Europe, but we’re working on it. A few more legal victories for CAIR, the election of a Democrat as president, another five years of lax border controls, and we’ll catch up with our European friends.

I have chosen the Statue Liberty as the United States’ iconic monument for the calendar.

“Give me your terrorists, your imams, your huddled madrassas, yearning to enslave us.” 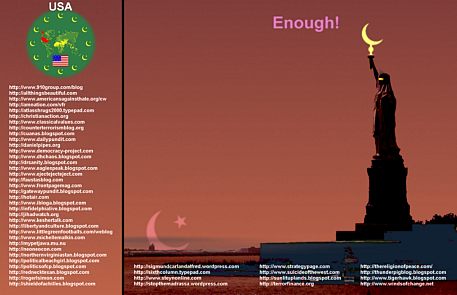 I had to pick and choose from the available sites for a list of American Counterjihad websites, and even then they overflowed the sidebar and spread across the bottom of the image. It was necessary to leave out a lot of good websites, including most of the milbloggers, in order to cull the list.

To restrict the list a little bit, the sites I chose have a major anti-jihad focus, or concentrate on combating PC and Multiculturalism, or focus on foreign affairs and national security. Even so, I had to leave a lot of them out.

So… I’ve selected the following list of American Counterjihad websites for the calendar.

For each country involved, I invite readers to post suggested Counterjihad links in the comments, or send them via email. I particularly need links for Britain, the Netherlands, Spain, and Greece.

With luck, the 2008 Counterjihad Calendar will be finished and available at our Café Press site sometime in September.

Next up on the calendar is Greece, for the month of August. I especially need Greek links — I have almost no Greek Counterjihad sites on my list.

25 thoughts on “The Counterjihad Calendar: July”