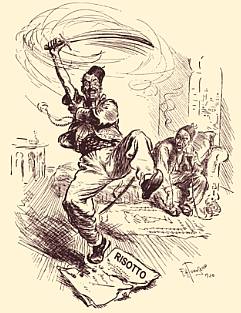 Last week’s big stink in Turkey arose from a pile of risotto. The Turkish Interior Minister Osman Gunes was served the delicacy by the governor of Mugla, Temel Kocaklar. Mr. Gunes was so taken with his meal that he called for the chef to ask how it was made. Upon learning that the risotto had contained a glass of wine, the Minister went off his trolley and fired the provincial governor.

This incident was widely reported in Turkey. Opinions on “Risottogate” were offered by leading theologians, who found in favor of the governor and against the fundamentalist and hot-tempered interior minister:

“Alcohol consumed in pasta is not a sin because the alcohol evaporates while it is being cooked,” said famous theologian Yasar Nuri Ozturk, while his colleagues Suleyman Ates, equally renowned, affirmed: “If a person consumes unknowingly a meal cooked in alcohol it is not a sin. It is enough to ask forgiveness from God.”

A poll taken by a newspaper in Ankara showed a sharp increase in interest in risotto in restaurants and grocery stores.

This Osman Gunes has a case of arrested spiritual development. It reminds me of an incident from my childhood. I was about seven, and as any Catholic from the old days remembers, one didn’t eat meat on Fridays back then. However, one particular Friday, after leaving my peanut butter sandwich unattended at a picnic, I came back to find it crawling with ants. They were eating my lunch! Knowing it was going to be a long stretch till supper time, I swiped most of the little bugs off my food and ate whatever of them I couldn’t remove. My friends were scandalized: in consuming the ants, I had eaten meat on Friday: doom awaited me.
– – – – – – – – –
Back in those days, as surely as Friday was followed by Saturday, on Saturday afternoons we went to confession. My conscience would not allow for dietary deviations and so I told the priest about my sin of eating “meat” on Friday.

Fortunately, the good monsignor hearing my confession was more spiritually evolved than the minister from Ankara.

“Were you very hungry?” he asked. I admitted as much.

“Was there any other food to be had at your picnic?”

“Well, then, you did the right thing,” said the monsignor. “God wants you to grow up healthy and strong and you won’t do that if you allow the ants to eat your meals. Besides, it would be a sin to waste food on some silly little bugs, wouldn’t it?” he asked.

We then went on then to discuss my permanent sin: I was always in trouble for talking in class. For that character fault I was given the usual three Hail Marys and absolution.

If a grown man goes off the track over an incident the imams say is no sin, I suspect that the honorable Minister Gunes must have wanted to fire the provincial governor anyway. If not, he is merely a hot-headed fundamentalist who knows how to ruin a good dinner.

I wonder what fate befell the chef?