Imagine that I were to say to you, “I’m feeling gay today.”

After putting a hand to your mouth to conceal a smirk and stifle a guffaw, you’d say, “Oh, c’mon, Baron! Don’t be ridiculous — we all know you’re straight. You have a wife and a child. Besides, you’re infamous in certain circles as a man with an eye for a well-turned ankle.”

“What are you talking about? I simply mean that I’m feeling light-hearted and happy-go-lucky.”

“Sure it does. Here, look at the dictionary: ‘1. Excited with merriment, manifesting sportiveness or delight… 2. Bright and lively in appearance…’”

“That’s the 1921 edition of Webster’s Unabridged!”

“But the meaning of the word ‘gay’ has changed.”

“Really? What does it mean now?”

“Baron, you need to get out more.”

I concocted the above fantasy so that I can talk about jihad.

Recently a Muslim commenter here at Gates of Vienna left us a treatise on jihad. Here’s an excerpt from it:

Do you even know what Jihad means? Contrary to popular belief, its not a holy war to destroy other religions and to make Islam predominant. That kind of act is forbidden in Islam.

A Jihad is any Islamic act that is performed under dire circumstances.

This exegesis on Islam is the standard CAIR party line. Another version of the same thing was recently put forward by the Jew-hating jihad preacher of VisionTV, Dr. Israr Ahmad:

Jihad i.e. the struggle to establish the just politico-socio-economic order ordained by the Creator of all humanity and given to mankind through his last Messenger Muhammad so as to bring peace and harmony in the world, should not be considered a bad thing.

This was after Dr. Ahmad had gotten himself in trouble with the Canadian TV network. But back before the kuffar were paying attention, this is what he had to say about jihad:

In the hour-long talk, Israr Ahmad said, “Jihad in the way of Allah, for the cause of Allah, can be pursued either with your financial resources or your bodily strength when you go to fight the enemy in the battlefield.

“So jihad, the highest form, is fighting in the cause of Allah.”

Young Muslims in Canada draw their inspiration from Hassan al-Banna, the founder of Al-Ikhwan al-Muslimeen, more commonly known as the Muslim Brotherhood. Al-Banna didn’t mince words in this meditation on jihad:
– – – – – – – – – – 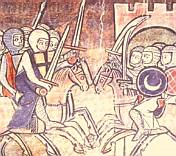 Islam is concerned with the question of jihad and the drafting and the mobilisation of the entire Umma into one body to defend the right cause with all its strength than any other ancient or modern system of living, whether religious or civil. The verses of the Qur’an and the Sunnah of Muhammad (PBUH) are overflowing with all these noble ideals and they summon people in general (with the most eloquent expression and the clearest exposition) to jihad, to warfare, to the armed forces, and all means of land and sea fighting.

To back up his assertions, he includes pages and pages of quotations from the Koran, the Hadith, and respected Islamic scholars. Then he has this to say:

Islam allows jihad and permits war until the following Qur’anic verse is fulfilled:

‘We will we show them Our signs in the universe, and in their own selves, until it becomes manifest to them that this (the Qur’an) is the truth.’ (Surat al-Fussilat (41), ayah 53)

My brothers! The ummah that knows how to die a noble and honourable death is granted an exalted life in this world and eternal felicity in the next. Degradation and dishonour are the results of the love of this world and the fear of death. Therefore prepare for jihad and be the lovers of death. Life itself shall come searching after you.

My brother, you should know that one day you will face death and this ominous event can only occur once. If you suffer on this occasion in the way of Allah, it will be to your benefit in this world and your reward in the next.

It’s evident that at least some Muslims believe that the word “jihad” means “holy war”. So whose dictionary are we going to use?

I cite Hassan al-Banna on this topic because the Muslim Brotherhood is one of the most influential propagators of Islam today. The writings of al-Banna and his successor Sayyid Qutb inspire devout Muslims all over the world. Osama bin Laden and Ayman al-Zawahiri are both proselytizers for the Ikhwan and its literature. 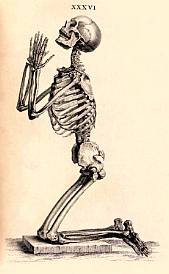 The Muslim Brotherhood is now ascendant, having been granted recognition by the West through its surrogates in Hamas and its apologists here in the USA in organizations such as CAIR. By legitimizing these groups, the White House has done much of the legwork for theIkhwan.

Yet CAIR, the White House, the media, and all the other apologists for jihad are the first to tell us that Islam is peaceful, that jihad means “an inner struggle”, that a great religion has been hijacked by a handful of fanatics, yadda yadda yadda.

Coming from CAIR, this is taqiyya, or lying in the service of Allah.

But what is it when President Bush or Condoleezza Rice says it? Is it stupidity, or sedition, or ignorance, or some combination of these three?

Or is it some kind of sly misdirection required by the inscrutabilities of statecraft?

What do they really think jihad means?

The disingenuous insistence by Islam and its apologists that “jihad does not mean holy war” is an example of what I call “refutation by redefinition”. An opponent is told, in effect, that his premise is wrong, that the named phenomenon does not exist, and that he is mistaken to describe the practice in such terms. In effect, the issue of violence in the name of Allah is redefined out of existence.

Thus, anyone who commits violence is not a “true Muslim” and is not practicing “true jihad”. The word does not mean these things, and people who act this way are not really part of the Ummah, so we may disregard them. For the purposes of argument, and airport security, and legislation, violent jihad does not exist.

The obfuscators for Islam are following a three-pronged strategy:

Helped along by a compliant media, this is a very effective strategy for Islam’s propagandists. In terms of the public discussion, jihad as an act of violence simply ceases to exist.

We must cut the Gordian knot concerning jihad, and refuse to consider any theoretical definitions of it.

Instead, let’s return to a Biblical simplicity: By their fruits ye shall know them.

It’s an irrefutable fact that thousands upon thousands of people are killed every year in the name of jihad. The people who do the killing consider their acts to be jihad. The “charities” that fund the slaughter believe they are following the dictates of the Koran and lending financial support to jihad. And millions — maybe more than a billion — of the Muslim faithful look on these actions with at least tacit approval, and consider them jihad.

If huge numbers of believers consider the wanton slaughter of innocents to be jihad, it doesn’t really matter how academics, diplomats, and editorial writers define the word. Usage is everything.

Once enough people have established usage, the definition in the dictionary changes.

Whatever the former definition of “jihad” was, usage requires that it be thrown out and replaced with what Arabic speakers mean by the word: “Indiscriminate and brutal slaughter of unbelievers, with the aim of extending Islam.”

Noah Webster could only approve.

7 thoughts on “That Which We Call a Rose”